City of fear at heart of Nigeria's Islamist uprising

By M.J. Smith and Aminu Abubakar 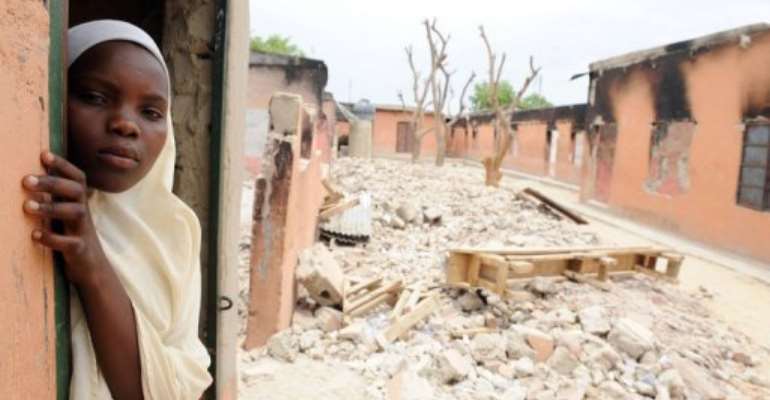 Boko Haram has attacked schools in Maiduguri to keep children away. By Pius Utomi Ekpei (AFP/File)

MAIDUGURI, Nigeria (AFP) - Classrooms have been burnt, reduced to piles of broken glass and shards of cement, but children and teachers remain, squeezing into the part of the building still standing for lessons.

"We thought of closing, but there are parents who are still insisting that they must come and learn," said an English teacher at the school, one of several burnt by suspected members of Islamist group Boko Haram in this city.

As he spoke, dozens of students scampered among the destruction at Maiduguri Experimental School, dressed in uniforms of yellow veils or caftans and green pants.

Fear pervades the northeastern Nigerian city of Maiduguri, the heart of an Islamist insurgency that has killed hundreds, with frequent military checkpoints and swathes of the most violent neighbourhoods deserted.

But residents who remain push on, worshipping at mosques or churches, including those protected by military deployments and razor wire, and visiting markets while avoiding antagonising soldiers they accuse of abuse.

"We don't feel safe," said a 39-year-old mother of three on a recent Sunday while seated under a tree among an overflow crowd outside a church that had been previously attacked. "Anytime we come, we feel that anything can happen."

Maiduguri, an impoverished city near the Sahara in Africa's most populous nation and largest oil producer, has been the hardest-hit by violence blamed on Boko Haram, whose attacks have left more than 1,000 people dead since mid-2009.

The group's headquarters and mosque were located in the city until they were left in ruins by a 2009 military assault in response to an uprising. The remains of the mosque are still there now, one of many signs of crisis in Maiduguri.

Boko Haram went dormant for about a year after the military assault, which killed some 800 people, but returned in 2010 with a series of assassinations before moving on to increasingly sophisticated bombings, including suicide attacks.

Maiduguri, the capital of Borno state, is still seen as its home base, though it has extended its attacks into other cities, including the capital Abuja and Kano, the country's second-largest.

Members are believed to have received training from Al-Qaeda's northern African branch in Mali.

The group now constitutes Nigerian President Goodluck Jonathan's greatest challenge as he marks one year since being sworn into office on May 29.

Most of the violence has occurred in the country's mainly Muslim north, but the group's constant widening of its targets has provoked concern nationwide.

The repeated violence in Maiduguri has hit the city hard, with thousands of residents fleeing and businesses hurting.

A military task force blankets the area, patrolling in trucks or keeping an eye out on the roadside from behind chest-high walls of sandbags.

A nighttime curfew forces businesses to close and residents to return home early. Frequent military checkpoints, attacked numerous times, along with the constant threat of violence keep residents on edge.

The military says the violence has been reduced in recent months in Maiduguri, and residents tend to agree, citing the heavy presence of soldiers, but bombings and shootings remain part of life.

Besides being caught up in the Islamists' attacks, residents have also accused the military of abuses, including the burning of homes and killing of civilians. The military says it does not condone such abuses and will investigate any accusations.

"The city has never witnessed such a catastrophe," he said, referring to the overall situation. "So much death, so much killing."

Retired general Theophilus Danjuma was recently reported to have called Borno a failed state and warned of the "Somalia-lisation" of Nigeria.

Another retired general, Mohammed Shuwa, who lives in Maiduguri, thought Danjuma went too far, but also expressed frustration with the spiralling violence.

Comparing his experience in Nigeria's 1960s civil war to the Islamist insurgency, he said the problem now was in determining who the enemy was.

Shop owners speak of dire circumstances, with fewer customers and the curfew that limits their hours.

"We're preparing to leave," said one 32-year-old shop owner born in Maiduguri but whose family is originally from the south, where he plans to move to.

He said he previously sold a significant amount of goods at night at his shop, which offers everything from electronics to kitchen supplies. Due to the curfew, he now closes around 5:00 pm.

At the Church of the Brethren on a recent Sunday, a crowd of worshippers passed a military post out front before being screened with a metal detector.

Women had to leave their bags outside, and the wall surrounding the church was ringed with razor wire.

The church was attacked on the night of December 24, but mass had been held earlier in the day and no one was there. The attackers shot at the roof and threw bombs, according to pastor Adamu Bello.

"I have lost many people here," said a 39-year-old teacher with four children at the church.

She added, however, that she had hope: "It will end ... Very soon it will be history."