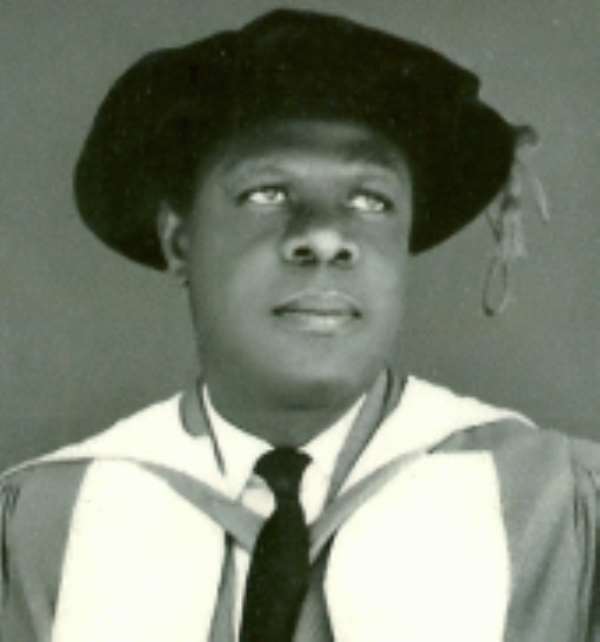 Dr Baffour was born at Elmina on May 14, 1912. His father named him Papa Kweku Andoh, after the father's father, as tradition demanded. To his many admirers, friends and students, he was to be known simply as Bob or R.P.

R.P. Baffour Jnr was a scion of four royal houses. His grandfather was Chief Kweku Andoh, the regent of Elmina from 1872-1897, and his father's mother was the eldest daughter of Yakubu, the Chief of Yendi in the 1870's.

R.P.’s mother, Mrs Frederica Baffour (Nee Okai), an educated lady more popularly known as Maame Fritsiwah, hailed from the royal house of Techiman and the stool house of Gbese in the Ga State.

He began his formal schooling in 1917 at the Catholic School in Elmina.

In 1924, his father took him to Nigeria where for two years he attended the Okar Government School. He came back home and in 1926 entered Richmond College (later Mfantsipim), joining in Form 2, a privileged band of brilliant mates, many of whom became prominent figures in Ghanaian national life. He sat his senior Cambridge Examination in 1930, obtaining exemption from the London Matriculation examinations.

Following the death of his father in 1931, he sat the competitive civil service entrance examination and came first in the whole of the Gold Coast. He received an invitation to proceed to Achimota to join the late Charles Deakin who was then starting an engineering school at Achimota.

Upon completing his course in 1935, R.P. Baffour passed his B.Sc. Engineering examination, one of only three to pass the examination from the then British Empire outside the United Kingdom.

He produced original designs and inventions which would have given him wealth and worldwide fame but for his colour. He designed the “Descender gear' for use on locomotives to prevent the slipping on wet rails. He followed this up with the design of a locomotive (250 Classes).

However, the marvel of his inventions was a clockwork device which in those early days of aeronautic engineering provided a means of determining the flight path of an aeroplane. This navigational aid amazed the British Air Force.

R.P. also participated in the initial surveys to determine the potential of the Volta Hydro-electric project, in particular the best site for the proposed dam.

From 1946 to 1953, R.P. worked with the Accra City Council, designing and building new vehicles (Ewurakua and King Kong).

In 1952, with internal self-government in place, Nkrumah acted upon his recommendation and the government began the construction of prefabricated houses at the Kaneshie Estate.

In 1958, as the first African Permanent Secretary of the Ministry of Transport and Communication, he produced the plan for the Tema township as an integral part of the Tema Harbour Project. He was key in the establishment of the Nautical College and the Black Star Line.

Fully supported by Osagyefo, he realised in his term a university that would turn the wheel of progress in Africa. He initially took up the post of Principal of the Kumasi College of Technology, then became the first Vice-Chancellor of the University of Science and Technology, a post he held till the overthrow of the CPP government in 1966.

The lecture rooms, the scientific laboratories, the student flats and administrative buildings, the assembly hall, the swimming pool and the stadium stand as abiding monuments to his vision.

In 1961, while administering KNUST, R.P. was appointed by Osagyefo to chair and establish the Ghana Atomic Energy Commission, an indication of the measure of confidence Dr Nkrumah had in R.P, who he simply refered to as 'Komfo'.

All these investments he made in the university raised questions from some quarters and the overthrow of Nkrumah in 1966 gave his detractors the chance to accuse him not only of misuse of public funds but also abuse of his office. Despite being cleared by a Commission of Public Enquiry, that attempt to destroy his good name remained his greatest sorrow.

He had outstanding achievements in the promotion of the arts and acted in the pioneer developmental films- 'Progress in Kojokrom','The Boy Kumasenu' and the BBC production, 'A Day in the life of an African'.

He was a great sports enthusiast and was one of the patrons of the Gold Coast team to the 1956 Helsinki Olympic Games.

R.P. loved Elmina and is credited with actively organising the Edina Korye Kuw and the Edina Mpuntu Fekuw with such high personalities as the late Messrs F. F. Plange, Wattenburg and M.E. Adams.

He worked tirelessly for the town's development, playing an instrumental part in securing the Elmina Fishing Harbour Project and was an exemplary Captain to the No.7 Asafo Company, Nyampafo.

While in England to treat his threatened blindness in 1953, R.P. came into contact with a renowned homeopath in the UK who introduced him to the use of the pendulum for dowsing and that led to his active involvement in the practice of homeopathic medicine as a hobby.

For an active man, retirement had no meaning and in 1979 he entered the presidential race as an independent candidate and lost.

Undaunted, he directed greater efforts to negotiating and finding the resources for the establishment of an industrial complex with the Opon Manse Steel Works as its centrepiece.

R.P. Baffour won an OBE for his service in 1953. The government of Ghana deigned to bestow on him the national honour of the Order of the Volta in 1979. History being his arbiter, his academic colleagues and products invited him to receive the degree of Doctor of Science (Honoraris Causa).

He was an immense source of sustenance to his family. He pursued with determined vigour his responsibility to his children.

With the span of 81 years, R.P. Baffour adorned his life with such glittering achievements and until sickness silenced his great voice, his soul never ceased to proclaim how kind God had been to him.