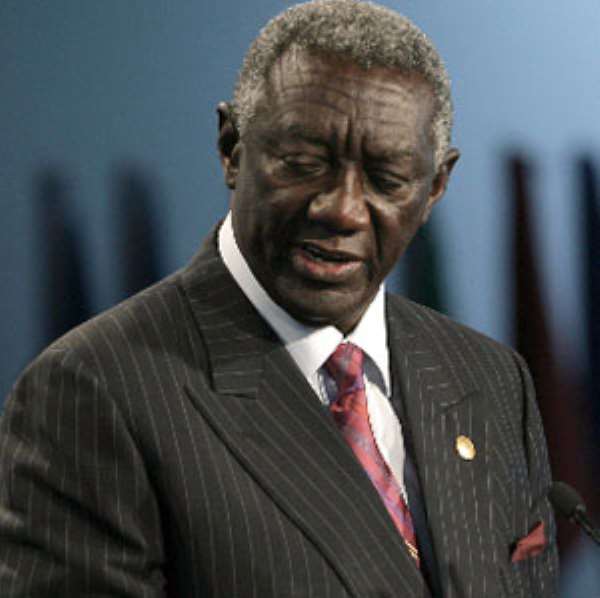 If, indeed, he has any serious ambitions of clinching the presidency in the offing, then Vice-President John Dramani Mahama royally blew that chance with his reckless remark recently that the Mills administration “will not hesitate in using a bulldozer to kill a fly” (See “Kufuor Schools Vice Prez John Mahama” Ghanaweb.com 5/6/12).

The foregoing remark, of course, was in response to the Kennedy Agyepong faux-pas, in which the New Patriotic Party's parliamentarian for Assin-North, in an angry riposte to the molestation and savaging of eligible NPP voters during the heat of the just-ended biometric registration exercise for Election 2012 by allegedly hired hoodlums of the ruling National Democratic Congress (NDC), called for retaliatory action against Ewes resident in the Asante Region.

While, admittedly, his call for the wholesale massacre of Ewes resident in the Asante Region was absolutely objectionable, and even repugnant, by any stretch of the imagination, and also in view of Mr. Agyepong's being a bona fide member of our august National Assembly, nevertheless, the flat and consistently mischievous refusal of the Mills-Mahama team to constructively stem the tide of brutal abuse by NDC partisans of their political opponents, particularly partisans of the main opposition New Patriotic Party, to a curious degree, justified Mr. Agyepong's conniption.

But that the Mills-Mahama government would go far out of its way to slap rather outrageous charges of “terrorism” and “treason” against the Assin-North MP, points more to the inveterate animosity for their political opponents than either professionally or clinically upholding the laws of the land; and it was clearly this unsavory state of affairs which former President John Agyekum-Kufuor wisely and maturely sought to bring to the attention of the Mills lieutenant, when he rightly observed recently that “killing a fly with a sledgehammer” was not the most progressive and conciliatory mode towards good governance.

As many legal mavens, including Mr. Kufuor, have already pointed out, the rather intemperate decision by the Mills-Mahama government to go for the proverbial jugular of Mr. Agyepong, has almost effectively foredoomed any chance of exacting any proportionately significant disciplinary action that may be unreservedly deemed to be due the accused. But even more significantly, the reckless reaction by the Mills-Mahama team to the Agyepong faux-pas has set a dangerous precedent whereby citizens elected to highly influential and powerful positions may be erroneously tempted to envisage such privilege as a license to unremittingly abuse, and even outright savage, their less powerful and less influential political opponents.

For Mr. Mahama, a smooth-operating “social democrat” with the unmistakable temperament of a rabid dictator, such reckless and politically intimidating rhetoric comes as all too natural. For being the son of a one-time Northern Regional Minister under the neo-fascist Nkrumah-led Convention People' Vice-President learned very early in life that politics is a Darwinian Zero-Sum game, in which the victor guarantees the total extermination of the loser. And so, perhaps, it bears reminding Mr. Mahama that Fourth-Republican Ghana is a world in which both the winner and the loser have an equal stake in both the mode of governance and the appropriation of the coercive instruments of the state.

Simply put, Mr. Mahama would be making a very costly mistake if the vice-president presumes a carte-blanche relationship between the coercive apparatus of the Ghanaian state and the presidency, or the executive arm of government. On the preceding score, we do not find it necessary to remind the Salaga native that countries like Liberia, Sierra Leone, Rwanda and the so-called Democratic Republic of Congo (DRC) at one time or another had leaders with a similar imperious attitude towards their office.

But that constitutionally speaking, the Vice-President of Ghana is also the ex-officio Head of the Police Council, is what makes matters at once even more urgent and precarious. One now also begins to fully appreciate why many a member of the Ghana Police Service (GPS) has in the last couple of years been routinely accused of abject lack of professionalism and flagrant partisan attitude towards his/her taxpayer-funded occupation.

*Kwame Okoampa-Ahoofe, Jr., Ph.D., is Associate Professor of English, Journalism and Creative Writing at Nassau Community College of the State University of New York, Garden City. He is Director of The Sintim-Aboagye Center for Politics and Culture and author of “Dr. J. B. Danquah: Architect of Modern Ghana.” E-mail: [email protected]