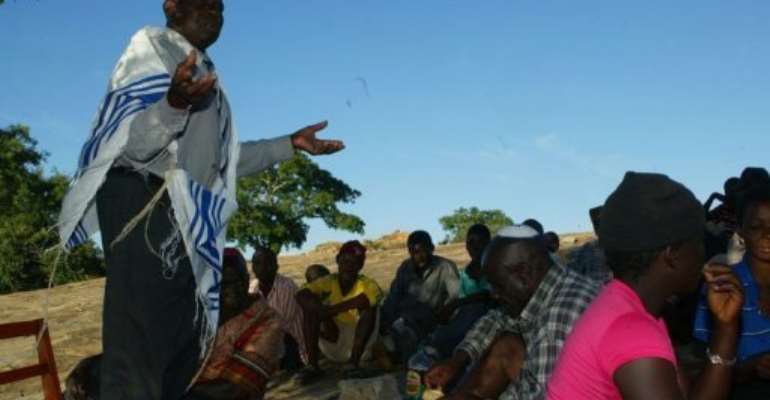 The Lemba tribe sees themselves as southern Africa's tribe of "black Jews". By Jekesai Njikizana (AFP/File)

GUTU, Zimbabwe (AFP) - Yarmulkes bob as voices swell in a sacred song carried from ancient Judea to the scenic fields of a far-flung southern African village that is home to a "lost tribe" of Israel.

"We have been singing this song for about 2,600 years. It's an old, old song," said Perez Hamandishe, wearing a white crocheted skullcup with a blue Star of David in a small village near Gutu, some 200 kilometres (120 miles) south of the capital Harare.

DNA evidence has proven that the verses were brought thousands of years ago from the Middle East to Zimbabwe, where members of the Lemba tribe still observe Jewish traditions.

The secretive Lembas observe strict rules that have more in common with norms in Tel Aviv than Harare: a ban on pork, ritual slaughter of livestock and male circumcision.

They see themselves as southern Africa's tribe of "black Jews" who have honoured their Semitic roots for centuries, despite converting to faiths like Christianity or Islam.

Their oral histories have been borne out by their genes: Unlike other groups with similar claims, the Lemba can point to genetic proof of links to the eastern Mediterranean.

Causing a splash in the late 1990s, tests showed that around 55 percent of Jews called Cohen shared an ancestor in the time of Moses -- and that a Lemba clan did as well.

"They also shared this ancestor who lived about 3,000 years ago in the Middle East," said Lemba expert Tudor Parfitt.

There is no written history of their forefathers' passage to what is now Zimbabwe, but the Lemba believe that their forefathers arrived with a replica ark -- known as the ngoma lungundu -- that went missing.

They say they are the descendants of white men who came from a place believed to be modern Yemen.

But their ties to Judaism are cultural and not religious, they say.

"If you remove Judaism, you have removed our culture," said Hamandishe, who is a member of Zimbabwe's parliament. "So we know Judaism as a culture, not as a religion."

"We tried to tell everyone about us, but people wouldn't believe. But now that hard science has proved it, we are now happy that what we have been telling them has now come to be the truth," said Hamandishe, who has visited Israel.

Numbering around 70,000, Lembas are also found in northern South Africa and share customs which are kept secret from the outside world through several cultural associations that interact with one another.

"Lemba is culture," said Shepherd Tseisi, the son of the chief in Mberengwa, another Lemba stronghold further south, reached via a bone-rattling drive down dirt roads that wind deep into the countryside.

"Because of our movements and the environment that we live within, some of our cultural activities tend to change. But that kind of concept of being a Lemba ... that's the same."

The Lemba, who claim to have built Great Zimbabwe, a medieval stone city now in ruins that is a UNESCO World Heritage site, have managed to prevent their customs from being absorbed or wiped out by dominant local and colonial cultures.

"Because of the passing of time, quite a number of things were forgotten, but very important things were actually remembered," said local headmaster Jacob Nyikavaranda, one of the elders who act as custodians of Lemba history.

"We are using Shona because Shona is now our local language. We have forgotten our original language (Hebrew)," Hamandishe said.

The Lemba have also relaxed a ban on marrying outside the tribe.

While similar communities with Judaic identities exist in Africa, the Lemba have science in their corner.

"I think it's fair to say that in absolutely the whole of Africa, they are unique because there are plenty of other tribes, many, many, many other tribes throughout Africa, who claim to have Israelite origins," Parfitt said.

"But the (Lemba) are the only one who claim to have Israelite origins that's actually got any genetic proof that they do. There is this very strong DNA evidence that they came from the eastern Mediterranean," he said.

"But they're black, they're a fairly well-integrated part of southern African society, they speak only local languages and they're Christians for the most part, so their identity is very complicated in racial terms. And quite what they make with it in the future ... we'll have to see."

Views are mixed on taking advantage of Israel's "right of return," ranging from enthusiasm for settling in the Jewish homeland to reluctance to being uprooted to find a new home and learn a new language.