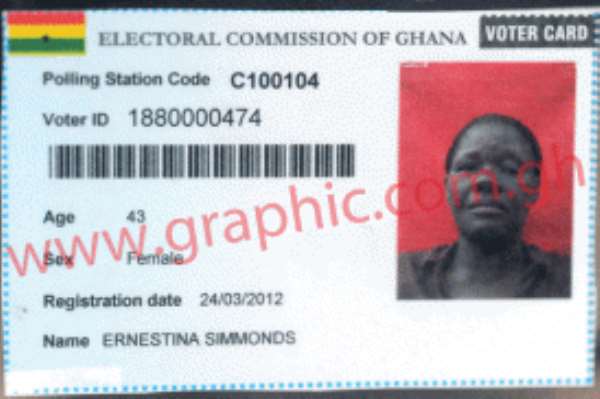 A biometric voter card A total of 3,829 had their applications challenged throughout the country as of the end of the second phase of the biometric voters registration exercise.

The acting Director of Communications of the EC, Mr Christian Owusu-Parry, who disclosed this in an interview with graphic.com.gh, said the Brong Ahafo Region topped the number of challenges with a total of 775 cases, followed by Ashanti, 681; Greater Accra, 588 and Central, 555.

Mr Owusu-Parry said the records show that the Ashiedu Keteke District in the Greater Accra Region recorded the highest number of challenges at the district level with 453, followed by Upper Denkyira West in the Central Region with 397, Jasikan in the Volta Region, 144, while Dormaa Municipality in the Brong Ahafo Region recorded 115 challenges.

An applicant may be challenged on the grounds that he or she is not a Ghanaian citizen, is below 18 years, is not resident of a locality, is not of sound mind, is previously registered or is not the person he or she claims to be.

District Registration Review Committees have been set up in each district to investigate the challenges and report on their findings to the commission.

An applicant’s registration as a voter may be challenged by anybody who qualifies to be registered as a voter. A challenge on the eligibility of an applicant to register as a voter will not stop him or her from going through the process if he or she insists that he or she is qualified.

The applicant would be allowed to go through the process except that he or she will not be issued with a voter identity card until the challenge is determined by the District Registration Review Committee.