S. Sudan defiant after week of fighting with Sudan 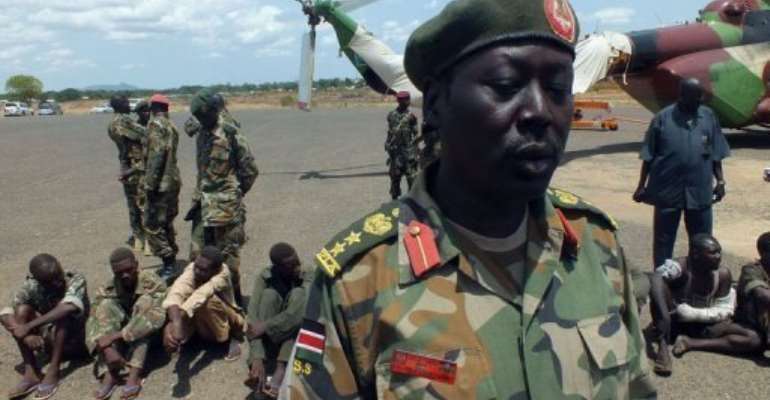 South Sudan soldiers guard a group of Sudanese prisoners of war in Juba on Sunday. By Waakhe Wudu (AFP/File)

JUBA (AFP) - South Sudan's army vowed Tuesday to hold their positions in a contested oil field seized from Khartoum's army, one week after the outbreak of bitter fighting that has raised fears of a wider war.

Despite air strikes and a reported counter-attack by Khartoum's Sudan Armed Forces (SAF) to retake the disputed Heglig oil field, the South's Sudan Peoples Liberation Army (SPLA) said it would not withdraw from the battle zone.

"If they advance, definitely SPLA is ready to fight back and repulse them. ... The SPLA is ready for them outside Heglig," Southern army spokesman Philip Aguer told reporters.

The hostilities are the worst since South Sudan's independence from Sudan in July, and world powers have condemned the fighting, as fears grow that clashes could spread beyond the current border conflict.

In Geneva, UN human rights chief Navi Pillay urged both sides to halt the hostilities, warning of the humanitarian consequences of the conflict.

"There is still time to pull back from the brink and bring all parties to the table to negotiate diplomatic solutions to disagreements over borders, oil, citizenship and other crucial issues," said Pillay in a statement.

"I call on all parties to work to avoid an escalation of armed confrontation, bearing in mind the dire human rights and humanitarian consequences for civilians," she added.

Fighting broke out last month between Khartoum and Juba in the Heglig oil field -- key to Sudan's already struggling economy, as it supplied around half of its oil production -- before an escalation of violence on April 10.

The South has reportedly placed tanks and artillery around oil infrastructure in Heglig, which both sides say belongs to them. Aguer said Khartoum had damaged wells as they sought to dislodge Southern troops by aerial bombardment.

"The border is still fragile, tension is still very high," Aguer added. "The SAF continue to bomb indiscriminately. ... On Tuesday they bombed one of the oil wells outside Heglig, it is still burning."

Khartoum has launched a wave of air raids on Southern border areas, killing several civilians and hitting a UN peacekeeper base on Monday in the village of Mayom, in the South's oil-producing Unity state.

The United Nations confirmed the attack, although Sudan denied the air strike.

However, the region appeared calmer Tuesday, with "no reports of fighting so far", said Gideon Gatpan, Unity state's information minister.

World powers have also called for restraint and voiced deep concern at the escalating violence.

Khartoum seeks the South's unconditional withdrawal from Heglig. But Juba has said it will not pull back unless Khartoum removes its troops from the contested Abyei region nearby, among other conditions.

Leaders on both sides have also exchanged angry rhetoric -- accusing each other of starting the violence and of wanting war -- with Khartoum's parliament on Monday voting the government of South Sudan an enemy, a move dismissed by Juba.

"I think this is a crazy decision. Our position is we consider the Sudanese people as brothers and sisters. ... We don't see them as an enemy."

Questions are being raised in Khartoum over how easily Southern forces managed to seize Sudan's main oil field, dealing another blow to an economy mired in crisis.

The Sudanese military is already severely stretched in the face of the major insurgency in South Kordofan, a smaller uprising in Blue Nile, and ongoing fighting in the war-ravaged Darfur region.

Some two million people died in Sudan's 1983-2005 civil war, one of Africa's longest, before the peace deal that opened the way to South Sudan's independence.

When the South separated, Khartoum lost about 75 percent of its oil production and billions of dollars in revenue, leaving the Heglig area as its main oil centre.