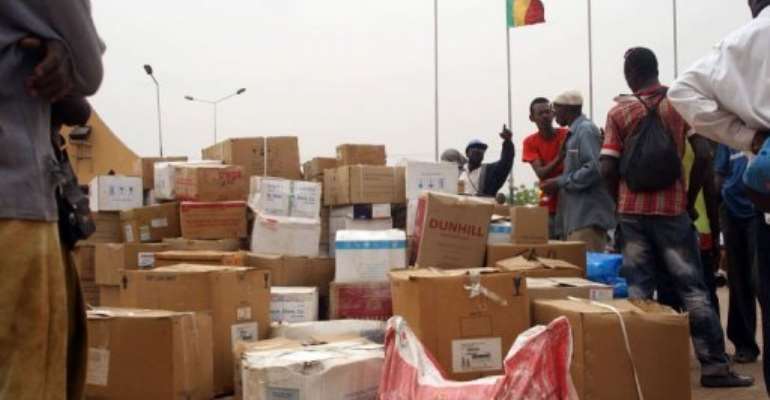 ECOWAS had raised the prospect of sending a force of up to 3,000 men to try to reclaim the north. By Habibou Kouyate (AFP)

Compaore, president of Burkina Faso, said the talks in Ouagadougou were aimed at finalising an accord reached last week for a return to civilian rule and finding ways to end a rebellion that has left the north of the country in the hands of Tuareg separatist and Islamist groups.

Meanwhile the Economic Community of West African States (ECOWAS), which named Compaore its mediator, said it had asked regional leaders to approve a troop deployment to end the rebellion.

Compaore said the intention of Saturday's talks was to agree on a roadmap to "ensure the proper functioning of republican institutions, restore territorial integrity and hold free and transparent elections in a peaceful and secure environment."

Compaore called on Malians to back the transitional government which is being formed "to strengthen the rule of law, respect republican values and maintain the integrity of the country."

More than 80 people were taking part in the closed-door talks with Compaore in a conference hall in the Burkina Faso capital, including senior officials of the junta, parliamentary and regional leaders and religious heads.

Former parliament speaker Dioncounda Traore was sworn in on Thursday as Mali's interim president after Amadou Toumani Toure resigned under the April 6 agreement.

The 70-year-old mathematician turned politician is expected to name a prime minister soon, and to organise elections within 40 days.

Toure has threatened "total war" against the northern rebels, who seized a vast swathe of territory amid the disarray that followed the March 22 coup, which the mutineers justified by the Toure government's mishandling of the Tuareg rebellion.

ECOWAS has raised the prospect of sending a force of up to 3,000 men to try to reclaim the region.

It said in a statement issued in Lagos Saturday that the bloc's mediation and security council decided at an extraordinary meeting in Abidjan on Thursday "that the regional force will be deployed if dialogue being brokered by the regional mediator, President Blaise Compaore of Burkina Faso, should fail."

"ECOWAS shall take all necessary measures to end the rebellion and maintain the unity and territorial integrity of Mali including the use of force," the statement said following the meeting attended by foreign and defence ministers.

The ministers also insisted that the rebels withdraw from all occupied territories as a precondition for negotiations.

To address the anticipated humanitarian consequences of the crisis, the ministers approved $3.0 million (2.3 million euros) in aid to the legitimate government of Mali and another $1.5 million to the neighbouring countries of Burkina Faso and Niger.

The European Union, France and the United States have already indicated their willingness to support ECOWAS' efforts to end the rebellion and preserve Mali's territorial integrity.

The junta is expected to retain some influence in Mali, with observers saying coup loyalists could be named to key ministerial posts, notably those linked to security as the army tries to reverse the massive rebel gains.

Many of the Tuareg rebels, who have waged several separatist campaigns over the years, are heavily armed and battle-hardened from last year's Libya war where they fought as mercenaries for slain dictator Moamer Kadhafi.

Joined by Islamist extremists linked to Al-Qaeda in the Islamic Maghreb (AQIM), they made unprecedented gains in the weeks since the coup, seizing the key towns of Kidal, Gao and Timbuktu.

Ansar Dine, the Islamist group that controls several key towns, has imposed sharia law in some areas under its influence and distanced itself from the Tuareg nationalist cause.

The UN Security Council has warned of the growing "terrorist threat" in northern Mali, while the world body's rights chief Navi Pillay said violations could be worsening in the region.