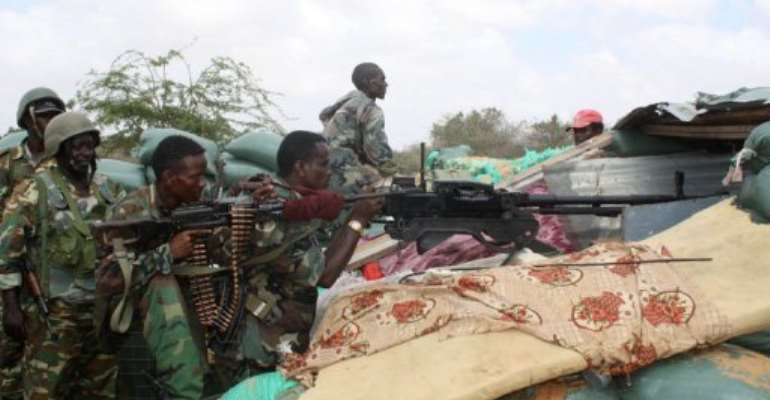 MOGADISHU (AFP) - Somali residents on Saturday fled one of the capital's last Islamist strongholds after a day of heavy fighting in which African forces backing government troops said they seized the area.

The few families still in the sprawling Deynile neighbourhood made the most of a lull in fighting to flee the area, which has for years been a haven for the Al Qaeda-affiliated Shebab, witnesses said.

The situation remained tense, and Dahir Mohamed, a local resident, told AFP that "we are still confused as to who is controlling what in the district. The situation is very volatile."

"There is no fighting today and the Afgoye corridor road was reopened," said another resident, Asha Osman, adding that families were leaving.

Deynile commands access to the Afgoye corridor, an area some 30 kilometres (20 miles) northwest of Mogadishu, which is controlled by the Shebab and is home to the world's largest concentration of internally displaced people.

The African Union Mission in Somalia on Friday said that Somali government troops backed by AMISOM forces had "seized the district of Deynile and routed the Al-Qaeda-affiliated Shebab terrorists."

But a humanitarian aid source reported that shooting could still be heard in the area well after the statement by AMISOM, a well-equipped force of more than 10,000 soldiers from Uganda, Burundi and Djibouti.

A Somali government commander insisted Saturday that his men were in almost complete control of the disputed neighbourhood.

"The military operation in Deynile was successful and the remnants of the Al Qaeda allies were routed," Abdikarim Yusuf Dhego-Badan told journalists.

"Our troops are now stationed in almost every part of the district and the situation is calm."

A Shebab official however denied the claim.

"The enemy lost in the battle and we have destroyed several of their armoured vehicles. Their ambition to take control of Deynile was foiled by the mujahedeen fighters", said Sheikh Abdalla Abu-Abdalla, a Shebab official.

"I assure you that all the areas the enemy attacked in Deynile are under the control of the mujahedeen fighters," he added.

Another resident said part of the neighbourhood appeared to still be under Shebab control while part had been taken by AMISOM. The area around the hospital, which had been in the thick of Friday's fighting, was a "no man's land" between AMISOM and Shebab positions on Saturday morning, he said.

A small group of Shebab fighters had occupied the zone later in the day, only to withdraw without sparking renewed clashes, he said.

The Shebab, who were recently recognised as an affiliate by Al-Qaeda supremo Ayman al-Zawahiri, want to create an Islamic state in Somalia and have battled the weak Western-backed transitional government for five years.

They once controlled up to 80 percent of the vast Horn of Africa country but government forces backed by local militia, regional armies and AMISOM have been regaining ground in recent months.

Since abandoning fixed positions in Mogadishu in August, the Shebab have been chased out of most of their strongholds, with the notable exception of the southern port of Kismayo.