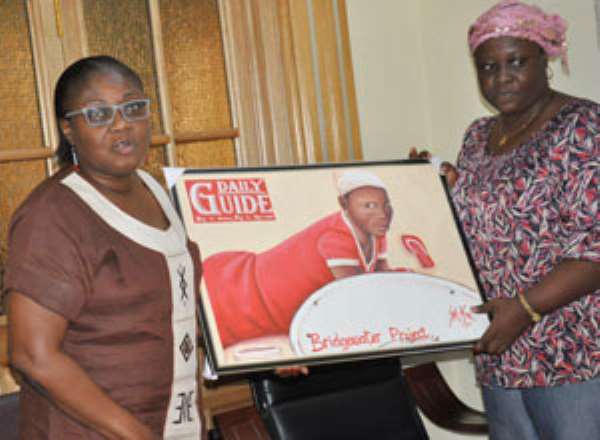 A Non Governmental Organization (NGO) working under the Pamela Bridgewater programme has presented a painting to Western Publications Ltd, publishers of the DAILY GUIDE .

The painting was received by the Chief Executive Officer (CEO) of the company, Gina Blay at a brief ceremony in the company's conference room recently.

The Kunata Voluntary Organisation, which seeks to encourage female porters, generally called kayayei, in Accra to leave the streets, have been engaged in a number of activities to impart money-making skills to the young girls who migrate from the Northern regions of Ghana.

He said that in spite of the many challenges, they have been able to surmount the hurdles through the support of the newspaper, and hoped that this would be consistent in the coming years.

Mrs. Blay, on her part, expressed gratitude for the gesture and appreciation of Kunata Voluntary Organisation.

As a woman, she said she was touched by the plight of her female colleagues who went through all manner of harrowing experiences in Accra.

She said it was delightful to learn that the NGO, which started as a small organization, had managed to chalk many successes in bringing smiles to the faces of the distressed young ladies from the North.

The painting, which depicts a typical kayayo or head porter, has the logo of DAILY GUIDE in the background to underscore the corporate social responsibility of the newspaper towards mitigating the suffering the female head porters.

The Pamela Bridgewater project is an initiative of a former US Ambassador to Ghana which seeks to improve the lot of the average Ghanaian through NGOs. Its support for the Kunata Voluntary Organisation has been consistent over the past few years.