…By Lies, Insults, False Allegations from JJ's Backyard
By The Al-Hajj 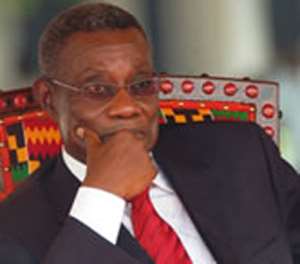 Information made available to the Al-Hajj suggests that the President, John Evans Atta Mills is agonized and saddened by the what is becoming a convention of lies, insults and false allegations coming from especially the backyard of his mentor and former boss ex-President Rawlings.

A source close to the presidency told this paper last week Friday that, though the president is confident Ghanaians will renew his mandate in the 2012 general elections judging from the 'unprecedented achievements' of his administration, he is nevertheless, upset by what is going on inside his own party.

Mills' distress, the source reveals; is as a result of the level of bickering, deliberate propagating of falsehood and in some cases absolute insults by some elements within his own National Democratic Congress (NDC).

“I can confirm to you that president Mills is not sleeping over the myriad of false allegations being leveled against his government especially those coming from his own mentor and former president, Jerry Rawlings's neighborhood”. The source disclosed.

According to the source, president Mills is not averse to criticism as he himself has on several occasions stated so, however, what the president strongly object to is the outright peddling of falsehood and insults by party members which he said has the tendency of destroying the party.

It may be recalled that, prior to the NDC Sunyani Congress in July, 2011, a close family friend of the Rawlingses, Mr. Herbert Mensah alleged he had security tapes which revealed President Mills' campaign team planned spending about GHS90 million in his campaign for the flag bearer ship race of the NDC.

This, many believed was done to put the former first lady, Nana Konadu Agyemang Rawlings in good position ahead of the NDC primaries which the president won by almost 97%.

Recently, a leading member of Friends of Nana Konadu Agyemang Rawlings (FONKAR) and a close aide to the Rawlingses, Mr. Ernest Owusu Bempah alleged that President John Mills had met with some party officials at the Peduase Lodge and declared that he doesn't need the support of ex-President Jerry John Rawlings and Wife to win the 2012 polls. This was stringently denied by Koku Anyidoho, Director of Communications at the presidency.

Owusu Bempah did not end there as he again, just a few days back alleged the First Lady, Dr. Ernestina Naadu Mills received a five million dollar ($5m) cash gift from the controversial judgment debt payment to businessman Alfred Woyome.

He was subsequently invited and questioned by the BNI after almost a week of making the allegation. He has since been released.

Since Prof Mills assumed the reign of power in 2009, the Rawlingses have continually described his administration as the most corrupt in the history of this country without providing any single evidence to back their claim.

The former first lady for instance stated prior to the Sunyani congress that, “corruption will rob NDC of retaining power in 2012”, adding “Ghanaians are now discerning to separate truth from propaganda and lies and I believe the electorate will not want the economic hardship they are going through under the current administration to continue”.

The utterances by the former first couple give credence to the fact that they may be behind vitriolic attacks by Ernest Owusu Bempah and others against the sitting president.