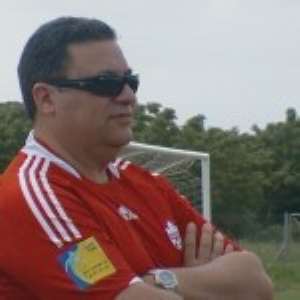 The Chairman of the Central Regional branch of the Ghana Football Association (GFA), Mr. M.N.S. Doe, is in hot waters, as the chiefs and people of Asafo, a farming community near Swedru in the Central Region, are calling for his immediate removal from post.

According to the chiefs and the people, Mr. Doe's continuous holding of the position of chairman for the Central Region was a threat to the future of football development in the region.

The anger and anguish of the chiefs and people were expressed at a press conference held at Asafo, and addressed by the President of the Asafo United Football Club, a second division team, Mr. George Papamikidis, who described Mr. Doe as 'the most corrupt government official in the region.'

Mr. George Papamikidis, a Canada-based Greek mogul, indicated that Mr. Doe had held the post for almost 30 years and not brought any progress to the region, alleging that he rather collects bribes from teams struggling for survival.

He further accused Mr. Doe of wrongfully quoting and applying the GFA status on expulsion of teams from the second division league using Article 17.1.2.

The President added that on Tuesday, February 2, 2012, the chiefs and people in the 17 districts of the region jointly signed a petition to the GFA President, Kwasi Nyantakyi, demanding Mr. Doe's urgent dismissal.

Mr. Papamikidis indicated that there have also been persistent media reports on Mr. Doe's misconduct, alongside his alleged massive involvement in financial malpractices, which according to the reports, inure to the disadvantage of football in the region.

The club president, therefore, called on the GFA executives to impress upon the Central Regional FA Chairman to resign immediately and institute investigations into his tenure of office, adding that refusal to act on their demand, would result in the people at Asafo descending on the offices of the regional FA in Cape Coast, come April 2012.

He added that the club responded by quoting Article 51-51.4, which cites the limitation of powers of the Central Regional FA on expulsion of teams from the second division league.

Mr. Papimikidis further disclosed that since Mr. Doe assumed office, he had never opened nominations for all interested members to be nominated, names published, and allow 14 days to elapse before the election date, as stipulated by GFA laws.

He, however, accused Mr. Doe of failing to produce an annual audited account and a comprehensive budget for discussion at congress before the start of the league.

He emphasised that the region can only boost of only one out 17 teams playing in the colts division.

The club president revealed that the management of the 17 second division teams in the region demanded that a member of the GFA Elections Committee be present at their elections as well, Mr. Doe would not accept the demand, but rather became agitated and called the police to expel the Communications Manager of Asafo United F/C, Jacob Ashun, and Vice-President, Kwasi Donkor Tuafo, from the meeting.

'We were taken to the police operations office, with Commander Hillarius Avornyo, Assistant Superintendent of Police at Cape Coast Central Regional Police headquarters, and explained the issues and read the limitations of the regional chairman to him and events leading to Mr. Doe's action,' he added.

Mr. Papamikidis has vowed to take matter to court if Mr. Doe does not refund their affiliation and officiating fees of GH¢1,150 to the team.