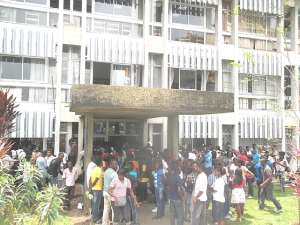 Several students of the University of Buea , south west Cameroon, last Thursday 1 March 2012 went on rampage on the university campus and took the Central Administrative building hostage for several hours, in protest over the postponement of their first semester examination which was due to begin that Thursday, but was put forward to Monday 5 March as a result of the strike action undertaken by lecturers under the umbrella of the Buea chapter of the National Syndicate of Teachers of Higher Education, SYNES.

we gathered that what pushed the students to run amok was when they discovered that students of the faculty of Health Sciences were writing whereas the rest of the students were told they would not commence. Under the banner of UBSU, the student union, students reportedly disrupted the exam sessions and demanded that either everybody writes or everybody doesn't.

While the Vice chancellor of the university, Prof Vincent P.K Titanji had a meeting with some top officials of the university together with the representatives of SYNES in the Board room of the Central Administration block, students blocked the entrance into the building, preventing any movement in and out. Some staff forced themselves out through the window.

After several hours of the meeting, the Vice chancellor descended to the crowd to reveal the outcome. He announced that the examination has been rescheduled for Monday and to end on 20 March. He cautioned, while being jeered, that students should not mingle themselves in the affairs of lecturers. He regretted the inconveniences caused.

Meanwhile most of the students expressed dissatisfaction that their stay in Buea will be unnecessarily prolonged, given that most of them had already planned on how to use the last few francs left in their pockets.

The lecturers had in a February 27 2012 press released signed by Prof.

president) and Dr. Fontem Neba (Secretary General), announced an indefinite strike action which they mentioned could affect the exams, which it actually did.

The reason for the strike, the dons mentioned, was that Heads of Department, Deans and the Vice chancellor should hence be elected by lecturers as per the decree setting up the university. The release stated that they had written to the Head of State Paul Biya, the Minister of Higher Education Jacques Fame Ndongo and the Vice chancellor Prof. Titanji, all in vain.

They mentioned article 54(a) which states that “the Faculty Board shall in a prescribed manner, from time to time, elect one of the Professors to be Dean. In the absence of a Professor, an Associate Professor shall be elected in like manner. The person so elected shall upon approval by senate and confirmed by decree, hold office for a period of three years renewable once. He shall have the rank of Director in the central administration” as well as article 74(a) which states that “ the head of department shall be appointed by the minister in charge of higher education upon the recommendation of the Vice chancellor and the Faculty Board in confirmation of the assembly of the Department, sitting without the participation of students. He shall have the rank of Sub-director in the central administration”

They concluded by saying that until their demand is met, their strike action will be indefinite.