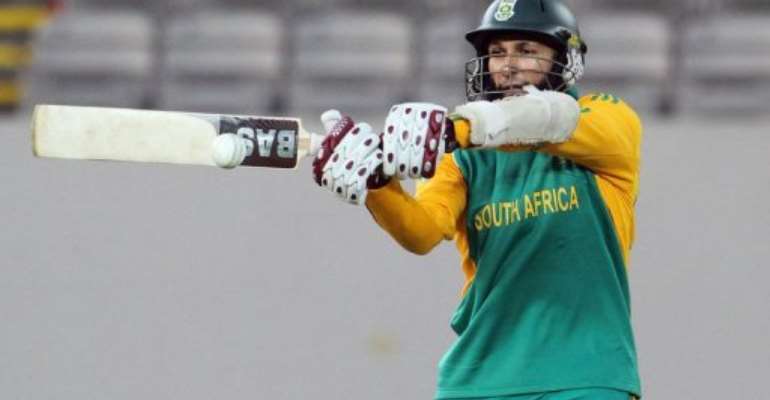 AUCKLAND (AFP) - Marchant de Lange took four wickets as South Africa completed a 3-0 whitewash of New Zealand in a withering display of pace bowling with a five-wicket win in the third and final one-day international on Saturday.

The tourists cruised to victory with 40 balls to spare to go with the lop-sided wins in Wellington and Napier and underscore their domination of New Zealand ahead of the Test series starting in Dunedin on Wednesday.

After being sent into bat in wet and windy conditions at Eden Park, New Zealand crumbled in the face of a hostile South African bowling attack to be all out for 206 in 47 overs.

Hashim Amla then gave a masterclass in how to handle the conditions as he laid the platform for the South African reply with a contemptuous display of batting.

It began with an 80-run partnership in 15 overs with Wayne Parnell who was surprisingly promoted to open the innings, and he then put on a further 58 in 12 overs with Albie Morkel for the second wicket.

Kyle Mills ended Amla's stand when he was caught behind by Brendon McCullum for 76 after facing 89 balls but by then the outcome was beyond doubt with South Africa 138 for two and with 22 overs left to get the remaining 69 runs.

Morkel scored 41, including two fours and three sixes before he was caught by Colin de Grandhomme trying to hit Michael Bates out of the park.

At 155 for three after 31 overs South Africa eased up on the run rate, and while Rob Nicol claimed two late wickets -- Faf du Plessis (19) and JP Duminy (25) -- New Zealand never looked to be serious contenders.

The Black Caps woes began when they were sent into bat where they found themselves immediately pinned down by an impressive display of pace and swing from Dale Steyn and Lonwabo Tsotsobe who were aided by heavy cloud cover.

Faced with a barrage of deliveries around 145 kilometres per hour (90 miles per hour) the New Zealand batsmen were not allowed to settle.

Martin Guptill was dismissed cheaply while fellow opener Rob Nicol played cautiously for 12 off 40 deliveries before he was gone and New Zealand were 45 for two.

McCullum and Kane Williamson set about rebuilding the innings but when their partnership began to blossom the 21-year-old de Lange was unleashed.

He immediately removed McCullum for 47 to have New Zealand at 74 for three and then ripped out the middle order to finish with an impressive four for 46 from nine overs.