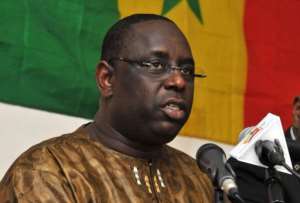 DAKAR (AFP) - Senegal's Macky Sall on Wednesday strove to unite the opposition behind him for a March 18 presidential run-off after emerging as the challenger to President Abdoulaye Wade in the first round.

Intense political wrangling got under way as the opposition urged its voters to rally around Sall and thwart the veteran leader's efforts to secure a third mandate and rule into his 90s.

"Wheeling and dealing between two rounds," headlined Le Populaire newspaper, as the country's media examined possible strategies and alliances available to the two contenders -- former allies before a bitter falling out.

La Tribune played up the former links between the president and his ex-prime minister: "Master and apprentice face off on March 18", the most likely date for the run-off election.

Provisional results put Wade, 85, in the lead with 34.97 percent and credited Sall with 26.21 percent, a humiliating blow to the incumbent who had promised a crushing victory in Sunday's election.

Sall, 50, is a member of the opposition June 23 Movement (M23) against Wade's third term candidacy which sparked a month of riots in the run-up to the election, leaving six dead and some 150 injured.

Another former prime minister Moustapha Niasse came in third with 13.24 percent and has already vowed not to support the incumbent, while other members of M23 are also most likely to rally around the younger candidate.

"The M23 message is that Wade must get out. The fundamental objective is that Wade's third term mandate does not happen," M23 co-ordinator Alioune Tine wrote in the Quotidien newspaper.

However Sall has in recent weeks come under fire for breaking away from the protest movement which had vowed not to campaign individually. While riots rocked Dakar he was busy lobbying voters.

Wade is seeking a new seven-year term after circumventing a two-term limit he introduced into the constitution. He says changes extending term lengths from five to seven years made in 2008 allow him a fresh mandate.

Wade has said his party "and its allies will naturally explore all the possibilities of understanding with other political forces" ahead of the run-off.

But in a pool of former ministers, prime ministers and political rivals - his options for alliances seem limited.

His rival Sall, who will address the media late Wednesday afternoon, speaks on his website of an "expanded government" which could include members of M23.

However another view evoked in the media was that some opposition candidates might choose to gamble on a few more years under the leadership of the ageing Wade which would give them another shot, than a possible 14 years, or two terms, under Sall.

Abdou Aziz Sow, a former minister under Wade, said the president could still dip into the large pool of voters who did not turn out on Sunday -- about 40 percent -- who may have been afraid due to pre-poll clashes.

Wade, who won in the first round in 2007 elections with 55 percent, has said he only wants three more years to finish his "grand projects" but this is widely seen as a bid to line up his unpopular son Karim to succeed him.

Africa's oldest leader after Zimbabwe's Robert Mugabe, 88, Wade was first elected in 2000 on a wave of euphoria and his supporters praise him for overseeing a development boom.

However he is accused of focusing on prestige projects and being out of touch with the needs of the people, battling high unemployment and crippling power cuts.

In a sign of his growing unpopularity, Wade was roundly booed as he cast his ballot and was trounced in his home polling station.

The younger Wade was at the centre of the storm which saw Sall -- himself once tipped as successor -- fall from grace after a meteoric rise which took him through several ministerial portfolios.

In 2008, as head of parliament, he was held responsible for Karim being summoned for questioning over the budget of the Islamic Conference organising committee headed by the president's son.