Nigeria suicide bomber 'had baby strapped to her back' 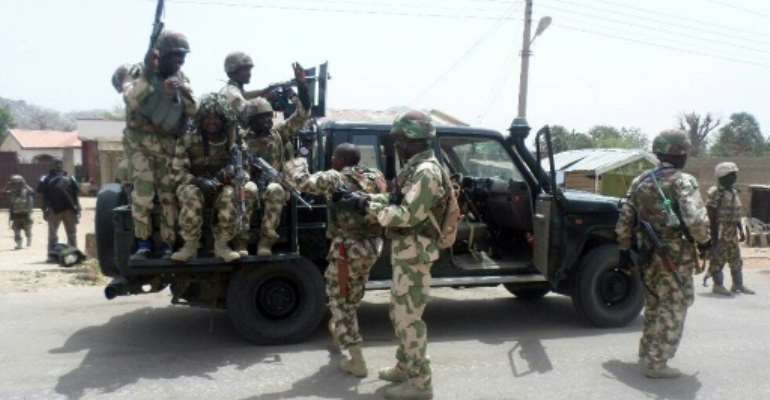 Madagali has long been a hotspot for Boko Haram attacks, despite being liberated from militant control. By NIGERIAN ARMY PRESS SERVICE (AFP/File)

Kano (Nigeria) (AFP) - A female suicide bomber who attacked a town in northeast Nigeria earlier this month was carrying a baby at the time, the country's main relief agency said on Tuesday.

But the National Emergency Management Agency (NEMA) said it was unclear whether this was a new tactic on the part of Boko Haram Islamists to allow would-be bombers to evade detection.

"From the report we got after the Madagali attack (on January 13), one of the female suicide bombers had a baby strapped to her back," said the NEMA coordinator for Adamawa state, Saad Bello.

"However it is not clear whether it was a coincidence or a strategy they employed to avoid detection by security personnel.

"This was one isolated case and it will be premature to arrive at a definite conclusion that the use of babies in suicide attacks has become a trend."

At least two people were killed and 15 others injured in the explosions in Madagali at a checkpoint manned by local hunters, at a military post and a bus station.

Police said four female bombers were responsible while the state government blamed Boko Haram, which has frequently targeted Madagali, including in December, when some 45 people were killed.

Boko Haram, which has been fighting to create a hardline Islamic state in northeast Nigeria since 2009, began using suicide bombers in mid-2014.

Women and girls, some reportedly aged 10 and younger, have been used to target checkpoints, bus stations, mosques, churches, schools and markets to inflict maximum civilian casualties.

Last week, the group's leader Abubakar Shekau admitted for the first time they had used women in the conflict.

Experts studying suicide bombings have said children are likely to be unaware they are being used as human bombs but that women using children and babies as cover for suicide attacks was rare.

In 2008, US investigators suggested a blast blamed on Al-Qaeda which killed at least 35 at a wedding reception north of Baghdad may have been carried out by a bomber pretending to be pregnant.

Two years earlier in Sri Lanka, another woman believed to be feigning pregnancy carried out a suicide bomb attack that killed 11 and wounded the country's army chief. Tamil Tiger separatists were blamed.

Ex-I.Coast president Gbagbo warns of 'disaster' in upcoming ...
37 minutes ago