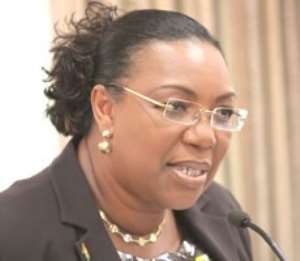 Former Attorney General and Minister of Justice, Betty Mould Iddrisu, is at the Ghana Police Serivce Headquarters in Accra to answer questions on her role in the Woyome scandal.

Mrs Mould Iddrisu was the Attorney General when the infamous GH¢51 million judgement debt was won by businessman Alfred Agbesi Woyome in 2010.

Her lawyers, earlier this month, sent a statement to the police indicating her willingness to co-operate with the police investigations into the scandal.

At the time of filing this report, it was not clear if she was invited by the Criminal Investigations Department (CID) of the Police or she was arrested in connection with the Woyomegate scandal.

Joy News' Anny Osabutey reports from the Police Headquarters that Mrs Mould Iddrisu was accompanied by her lawyer Nana Ato Dadzie and some family members.

Her appearance has largely been described as uneventful devoid of any large crowd - usually party supporters and well wishers.

Some leading Members of the opposition have been accused of stampeding the police to arrest her after the arrest of NPP MP for Aburi-Nsawam OB Amoah.

But counsel for Mrs Mould Iddrisu, who thinks the police is already up and doing, said claims that Betty ordered and supervised the controversial payment are false, arguing that the police must be allowed to get to the bottom of the case so as to establish the truth.

Nevertheless, the Minority Leader in Parliament Osei Kyei-Mensah-Bonsu who is accused of pushing for her arrest told Joy News criticisms of the former Attorney General are against her actions, not against her person.