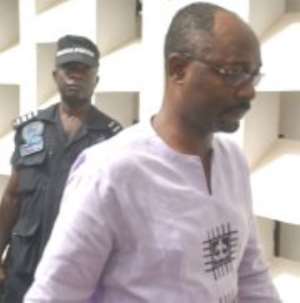 When the trial of businessman, Alfred Agbesi Woyome begins at an Accra High Court, his lawyers will not only be seeking to prove that he earned the judgement debt money paid to him legitimately but also that Finance Minister, Dr. Kwabena Dufuor has been economical with the truth as far as his role in the payment of the said money is concerned.

The lawyers will also be seeking to show to the world that the final report of the Economic and Organized Crime Office (EOCO) based on investigations it carried out into the matter and presented to President Mills is a piece of shoddy work and conspiracy against the businessman.

Intelligence the Daily Post has indicates that the legal team of the businessman has massed up several documentary evidence with which it intends to expose both the Finance Minister and the EOCO in court.

Some of the documents this paper has sighted show that contrary to what Dr. Dufuor told EOCO as captured in their report, he was aware of the opinion given to the Attorney-General's Department by his Deputy Director (Legal), which shows that Alfred Woyome has both the capacity and legitimacy to demand for the money that was eventually paid to him.

According to the lawyers, if there is anybody to be blamed for the inability of the government to enter an appearance at the court in the case, then it is the officials at the Ministry of Finance who failed to furnish the Chief State Attorney with the necessary document to enable him fight the case in court..

Two letters are going to be Woyome's lawyer's proof in this matter. The first is a letter dated 28 April, 2010 and written to the Attorney-General by the then Acting Chief Director of the Ministry of Foreign Affairs, Mrs. Effie Simpson-Ekuban.

In the letter headed RE: ALFRED AGBESI WOYOME VRS (I) THE ATTORNEY GENERAL (2) MINISTRY OF FINANCE & ECONOMIC PLANNING. The Chief Director writes.

“We refer to the above mentioned suit (copy enclosed) served on this Ministry and the Attorney General's Department by the Commercial Division of the Accra High Court.

Also enclosed, is a Statement of Claim by the plaintiff which we respectfully urge your office to study and represent this Ministry in Court.

We count on your usual co-operation.
Much obliged.”

The letter is copied to the Solicitor General of the Attorney-General Department. This proves that she too lied when she said she knew nothing about the judgement debt saga.

The second letter, written by Chief State Attorney, Samuel Nerquaye-Tetteh and dated 15th June 2010 is a response to the one written by the Chief Director of the Ministry of Finance. The reply reads

In that letter, you enclosed for our study a copy of a Writ of Summons and Statement of Claim in respect of the above-mentioned case for our study and representation of the Ministry of Finance in court.

We have initiated the necessary processes for the defence of the matter. We would, however, require documentation and any other relevant information, which would enable us to defend the matter, from your Ministry to enable us respond to the statement of claim.

Please endeavour to send us this information before 18th June 2010 to enable us file the necessary processes in court in time.

According to the legal team of Mr. Woyome, based on the second letter, the Chief State Attorney cannot be said to have “refused to go and defend the action” as alleged by the EOCO report nor can it be said to be due to his connivance with anybody. Rather, it was due to the fact that the Ministry of Finance failed to provide him with the documentation and other relevant information he requested for before the 18th June 2010 to enable him file the necessary process in court.

Alfred Woyome's lawyers in putting these evidence before court will want to depend on it and others, to convince the court that the inability of the government to enter a plea against him is not a conspiracy between Mr. Woyome and anybody in the A-G's department but rather the negligence of duty of the Ministry of Finance .

There are also two documents Woyome's lawyers hope to tender in court as evidence that contrary to his claims, the Finance Minister knew about the opinion that Mr. Paul Asimenu wrote to the A-G's department which formed the basis of the payment of the money to Alfred Woyome.

The first letter was written by the Deputy Attorney-General, Hon. Barton-Oduro to the Minister of Finance. It has Paul Asimenu's opinion which he sent to the A-G attached to it. The second is an ammendment of the first, written to the Finance Minister by the Attorney-General.

In the first letter, dated 29th March, 2010, the Deputy Attorney-General wrote to the Finance Minister explaining why the A-G had decided to enter into a consent judgment with Mr. Alfred Woyome.

The Deputy Attorney-General in the letter made it clear that his letter was in response to that of Mr. Paul Asimenu (copy attached) which explained why “given the complexity of the work involved in securing the financing in question, the claim of two percent (by Alfred Woyome) is deemed legitimate.”

According to sources, the Finance Minister, on receiving this letter, objected to the mention of Paul Asimenu's name in it and therefore requested that another letter be written and the position of Mr. Asimenu mentioned instead of his name.

According to the lawyers, Dr. Duffuor cannot claim he never saw the opinion of Paul Asimenu to the AG and that he queried the settlement later based. This is because the letter from the Deputy Attorney-General to him had Asimenu's opinion to the A-G attached to it.

When the Finance Minister received the letter from Barton Oduro, while waiting for the amended one from the AG as he had requested, he wrote “Dep. Director(Legal), Pse, study and advice 30/3/10”on the letter and then had it sent to Deputy Director (Legal), Paul Asimenu.

Woyome's lawyers, the Daily Post has learnt, have a whole lot of arsenal at their disposal to prove their client's legitimate right to the money.