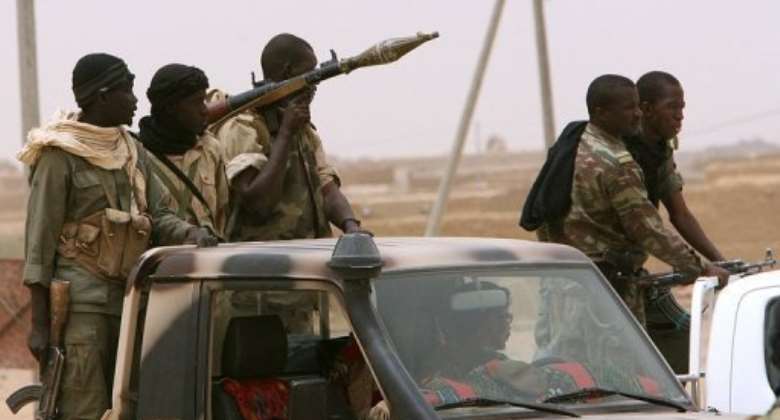 BAMAKO (AFP) - Tuareg rebels clashed with Malian troops Thursday as they attacked a town in the north of the country, after last week's first major offensive in three years, the rebels said.

"We attacked Anderamboukane this morning... The Malian army is facing us," said Moussa Salam, a spokesman for the Azawad National Liberation Movement (MNLA) which is demanding autonomy for the nomadic desert tribe.

Ahmedou Djire, a teacher in the extreme north-eastern town some 1,600 kilometres (1,000 miles) from Bamako, confirmed fighting was under way.

"The army is firing, the rebels too. It started at about 6:00 am (0600 GMT). We also heard an army helicopter," he said, with gunfire audible over the telephone line, before communication was cut off.

The town of 3,000 people on the border of Niger is some 100 kilometres from Menaka, one of three towns attacked last week by Tuareg rebels, many of whom recently returned from fighting for fallen Libyan leader Moamer Kadhafi.

Anderamboukane hosts a popular Tuareg festival in January of every odd year, but it will not go ahead in 2012 due to security concerns.

Foreign Minister Soumeylou Boubeye Maiga said this week the government was ready to listen to Tuareg concerns but would not accept violence.

"We have no problem with the Tuareg. They are Malian citizens like any other who can have expectations, aspirations and impatience," Maiga said on the sidelines of a security meeting in Nouakchott.

"Some groups have demands which they try to make known through violence and with weapons... all these demands can be expressed without turning to violence.

"The Malian state is ready to listen but it will not accept actions which threaten the country's security and stability. Mali's unity and indivisibility is guaranteed," Maiga added.