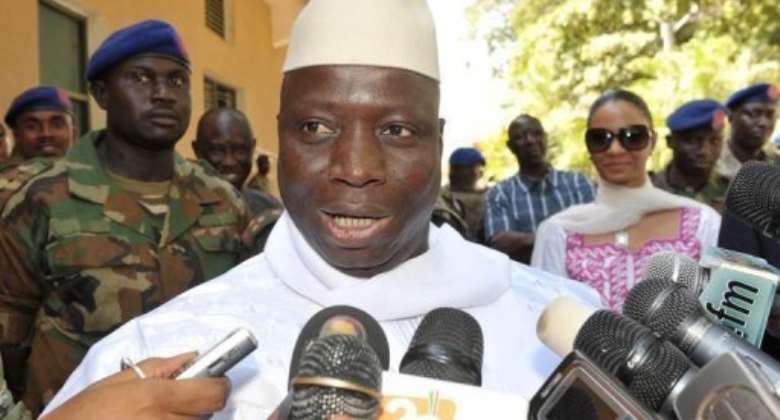 Jammeh has ruled Gambia since seizing power in 1994 aged 29. By Seyllou (AFP/File)

BANJUL (AFP) - Gambia's President Yahya Jammeh vowed ahead of his swearing-in for a fourth term Thursday to clamp down on lazy workers, eradicate corruption and turn his tiny country into an economic superpower.

Jammeh, who has ruled Gambia with an aura of mysticism and an iron fist since seizing power in 1994 aged 29, said in an address to the nation Wednesday night he had been "too lenient" in the past.

"I will be more dangerous in the next five years than when I was, even in uniform, because people have to change their attitude to work," he said on state TV, promising that people would see "a different Yahya Jammeh."

"You cannot be in your offices everyday doing nothing or leaving the work load on few people, and at the end of the day you expect to be paid. This has to stop. You either do your work or leave or go to jail."

"I will wipe out almost 82 percent of those in the work force in the next five years starting this Friday (tomorrow) unless they change their attitudes," he said without elaborating.

Jammeh said he would turn Gambia, the smallest country on the African mainland, into an "economic superpower in the next five years" if people worked harder, promising to focus on women empowerment and youth employment.

"Also the next five years will see more people going to jail because there will be zero tolerance on corruption and drugs. We will not compromise the security of this country in the interest of the few."

African heads of state and representatives arrived Thursday morning for the inauguration ceremony at the 35,000-seat Independence Stadium in Bakau, 25 kilometres (15 miles) from Banjul.

Gambia's former president Dawda Jawara, 83, who was overthrown by Jammeh in a bloodless coup in 1994, was also in the stadium, an AFP journalist reported.

Jammeh swept 72 percent of the vote in November, in an election which the opposition and observers criticised for the use of state media and resources to back his campaign.

The 15-nation Economic Community of West African States pulled out of observing the poll, saying Jammeh's control of the media and voter intimidation meant it could not be free and fair.

The regime of the man who says he can cure AIDS is often pilloried for human rights abuses and the muzzling of journalists. He has jailed dozens of army officers and others for allegedly attempting to overthrow his government.

On Tuesday former information minister Amadou Scattred Janneh was sentenced to life in prison for treason, for distributing T-shirts which featured the slogan "End to Dictatorship Now".

"President Jammeh is once again proving that he does not tolerate any form of criticism and is ruthlessly persecuting anyone who speaks out against his regime," said Lucy Freeman, Amnesty International's researcher on Gambia.