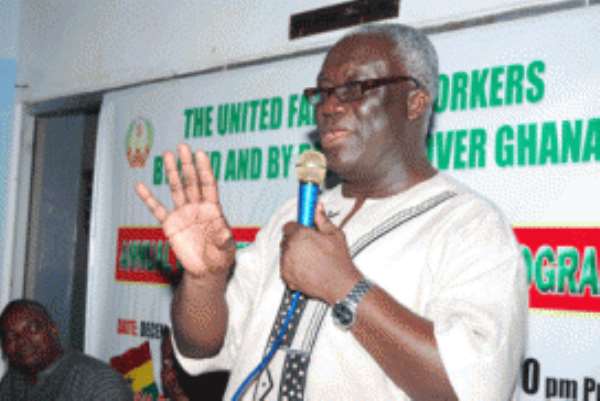 There are mixed reactions to increases in fuel prices and transport fares announced by the National Petroleum Authority and the Ministry of Transport in Accra on Wednesday.

While the Trade Union Congress and some commercial transport owners, drivers and passengers have expressed disappointment others said the decision was in the best interest of the economy.

Other sections of the public also entreated the government to formulate effective strategies to mitigate the effects of such price hikes.

In a statement signed by the General Secretary, Mr Kofi Asamoah, the TUC said it had noted with “deep concern and outright dismay” the announcement by the National Petroleum Authority (NPA) of fuel price increases by between 15 and 30 percent.

The TUC said the increases during the yuletide with all the commitments of Ghanaian workers as well as the imminent payment of the school fees of wards in January, 2012, were astronomical.

“We find it difficult to appreciate how government could slap such astronomical increases on the Ghanaian workers, their families and the travelling public in the middle of the Christmas festivities, especially, when many workers went into the season without receiving their salaries. Working people also have school fees and other commitments in early January to pay,” the statement said.

While pointing out that the timing of the announcement of fuel price increases was wrong and unacceptable, the TUC emphasised the untold hardship the increases would bring to families and households.

“For 2011, therefore, Ghanaians have had to endure a cumulative increase of between 35 and 60 per cent increases in fuel prices.

This astronomical increase is compared with the timid increase of 20 percent in wages and salaries across board for public sector workers for the whole year.

“This means that for the ‘action year’, Ghanaian workers and their families have only witnessed an erosion of their incomes giving the very direct link between fuel price hikes and the general price levels in the country,” it added.

The statement said TUC had on several occasions expressed concern over such exorbitant increases in fuel prices, equally expressing concern over the manner in which fuel prices were determined and announced in the country.

Transport fares at the Neoplan station in Accra have increased to almost 30 per cent even though the NPA had approved 10 per cent as inter-city fares, reports Zainabu Issah & Mary Ankrah in Accra.

Mr John Tetteh, the First Trustee of the Neoplan Drivers Union told the Daily Graphic that the increment of the petroleum products also affects the prices of spare parts and lubricants.

The Transport Manager of the VIP Transport services at the Nkrumah Circle, Mr Eric Botswe told the Daily Graphic that they increased their fares only around 12 noon today (Thursday), after a board meeting held by the Board Members of the company.

Marian Ansah & Moses Awiah reports that the situation was not different at the Kwame Nkrumah Circle trotro station where most transport operators although dissatisfied about the increase in the petroleum prices, stated that there was nothing they could do about it, because the government had already taken its decisions.

They said they were contented that the passengers had not given them any problems so far.

Mr Stephen Ana, the Secretary of the Biakoye Taxi Drivers Union said the increment came unexpected that at the moment some taxi fares in his jurisdiction will be increase and others will maintain the old prices until another petroleum increment.

This was because the little increment on those fares are insignificant and would not cause any problem to the drivers.

He added that the union was still waiting for the National Coordinating Council of the GPRTU to print the new fares list to paste so that passengers will have a fair ideal about the new developments in the station.

Mr Ana pointed that the taxi fares from Circle to Dansoman which supposed to be increased from GHC 1.50 to GHC1.65 is GH 1.60, Circle to North Kaneshie and Fadama still remain GHC 1.10 while North Kaneshie to Swanlake has moved from 0.60Gp to 0.70Gp for Peugeot cars.

Some passengers at the various lorry parks admitted that it was in the past that passengers quarrelled with drivers and their conductors over increase in transport fares when fuel price was increased, due to lack of communication writes Alice Aryeetey

They stated that things are not the same anymore since most people now have radio and television sets, as well as read newspapers in their homes and work places, from which they get most information from.

“There is no need in fighting over this, when you hear it on the radio that fuel prices have been increased”, a passenger said.

From Tamale Vincent Amenueveve reports Drivers who ply between Savelugu and Tamale said business slowed down when the new fuel prices were announced as most residents in Tamale and Savelugu were reluctant to travel. The fares between Tamale and

The Northern Regional Vice Chairman of the Ghana Private Road Transport Union (GPRTU), Alhaji Abukari Chendiba,confirmed the fuel hikes and new transport fares but warned drivers to charge the approved transport fares that have gone up by 10 percent.

He urged them to avoid overloading as a means of making more money at the expense of the passengers’ comfort and safety.

He said the various stations have been instructed to boldly display the new fares on their respective notice boards for passengers to be aware of them.

A taxi driver, Mr. Abdulai Mohammed stated that the 15 percent price hike in petrol does not tally with the 10 percent increment in transport fares. He explained that the discrepancy was likely to affect commercial drivers than the rest of the public.

Mr. Adam Mohammed, a student was not happy at the fuel increases saying “money is hard to come by these days”.

From Koforidua, Nana Konadu Agyeman, reports that all the transport union executives at the various lorry stations in the New Juaben Municipality have complied with 15 per cent increases in fares.

At the Kumasi Lorry Park, fare for Koforidua-Kumasi bound air-conditioned vehicles had been increased from GH8 to GH9, while the fare for the ordinary ones had also shot up from GH7 to GH8.

Koforidua-Nkawkaw bound vehicles had their fares increased from GH3.20p to GH4, while air-conditioned vehicles moving from Koforidua to Accra had also raised their fare from GH4.20p to GH5, with the ordinary vehicles increasing their fares from GH3.50 to GH4.

A number of passengers the Daily Graphic spoke at the various stations expressed no resentment at the fares increases but hoped that there would not be further fare increase in the near future.

Managers of fuel stations in the Sunyani Municipality have started implementing the announcement of the increases in the commodity while drivers plying the various routes in the area and beyond have adjusted their fares correspondingly reports Akwasi Ampratwum-Mensah in Sunyani.

From the lorry stations to the various destinations, taxi fares which attracted 40Gp and 50Gp, have now gone up to 50Gp and 60Gp respectively while Urvan bus drivers from Sunyani to Kumasi are charging GHC50.00 instead of the previous fare of GHC40.00.

From Sekondi/Takoradi, Moses Dotsey Aklorbortu, reports that the increase in the fuel prices announced by NPA has reflected in various fuel and LPG stations in the Sekondi/Takoradi Metropolis.

Before the approved 10 per cent fare adjustment was announced, drivers at various lorry stations had adjusted their prices a little higher than what was announced.

Some of the drivers were rather charging between 50 and 100 per cent which resulted in some form of heated argument between the drivers and passengers in the early hours of Thursday.

The situation was replicated in other parts of the metropolis but some passengers at lorry parks at Anaji refused to board the ‘trotro’ due to the arbitrary increament but the situation was later resolved.

At the time of going to the press, situations have normalized and drivers were going on as usual.