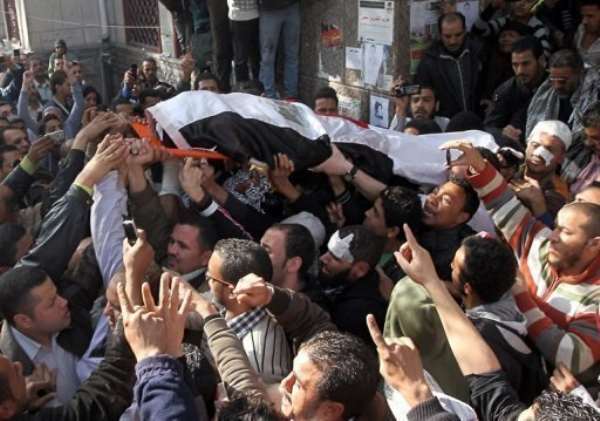 CAIRO (AFP) - Clashes between Egyptian security forces and protesters demanding an end to military rule entered a fifth day on Tuesday, as US Secretary of State Hillary Clinton denounced the beating of women as a "disgrace."

Riot police used rocks, batons and live bullets to disperse protesters through the night and into the morning, witnesses said, in violence that has left 12 people dead since Friday.

The clashes have heaped pressure on the ruling Supreme Council of the Armed Forces (SCAF), with both liberals and Islamists facing off in the country's first post-revolt elections condemning its handling of the transition.

In Cairo's Tahrir Square, field hospital volunteer Mohammed Mostafa said four people were killed overnight but health ministry officials told state television there had been no deaths, but that four people had been injured.

One witness told AFP that a 14-year-old child in the field hospital had been treated for a bullet wound to the chest.

The SCAF -- which took power when a popular uprising ousted Hosni Mubarak in February -- denies it gave orders to use force against protesters but admitted troops had beaten a veiled woman after having ripped her clothes.

The picture that shows the woman sprawled on the ground, helmeted troops towering over and kicking her, her stomach bared to reveal her bra, has encapsulated the heavy hand used against the protesters and sparked nationwide outrage.

Footage circulating on social networking sites showed army troops beating protesters, sometimes leaving their bodies motionless on the ground, but it is the beating of women that has enraged the country.

"The forces that violate the honour (of women)," read a headline in the independent daily Al-Tahrir above a picture of a soldier grabbing a female protester by her hair as another raised a club over her.

An impassioned Clinton on Monday accused post-revolution Egypt of failing its women as she denounced the stripping and beating of the female protester as "shocking".

In unusually strong language, the US secretary of state accused Egypt's new leaders of mistreatment of women both on the street and in politics since the revolt nearly a year ago that overthrew Mubarak.

"This systematic degradation of Egyptian women dishonours the revolution, disgraces the state and its uniform, and is not worthy of a great people," said Clinton.

Female protesters have called for a demonstration in Tahrir Square at 3:00 pm (1300 GMT) to denounce the attacks on women and to call for an immediate end to the violence against protesters.

On Monday, the SCAF said the army "does not use force against protesters" but qualified those in Tahrir as "people seeking to destroy the state... not the honourable people of the January 25 revolution."

However, it admitted troops had attacked the veiled female protester.

"Yes, this happened. But you have to look at the circumstances around (the incident)," said SCAF General Adel Emara. "We are investigating it, we have nothing to hide."

Emara said on Monday that he had "received a call now to say that a plot was uncovered today to burn parliament and there are now large crowds in Tahrir Square ready to implement the plan."

AFP correspondents in Tahrir said that at the time of Emara's statements there were no signs of tension either in the square or in surrounding streets, where a historic building containing national archives was destroyed and protesters were trying to save any surviving documents.

The comments came as human rights groups and dissidents slammed retired army general Abdelmoneim Kato -- an adviser to the military -- for saying some in Tahrir were "street kids who deserve to be thrown into Hitler's incinerators."

A group of newly elected members of parliament -- including Islamists and liberals -- on Monday announced a sit-in outside the Cairo Supreme Court, demanding an immediate end to the violence against protesters and an investigation.

British Foreign Secretary William Hague said the violence was "inconsistent with the democratic process in which Egypt is now engaged."

"It can no longer be considered acceptable to supply the Egyptian army with the types of weaponry, munitions and other equipment that are being used to help carry out the brutal acts we have seen used against protesters," said Amnesty's Hassiba Hadj Sahraoui.