The Supreme Court Of Nigeria Threatens To Wipe The Igbo “Off The Surface Of The Earth.” 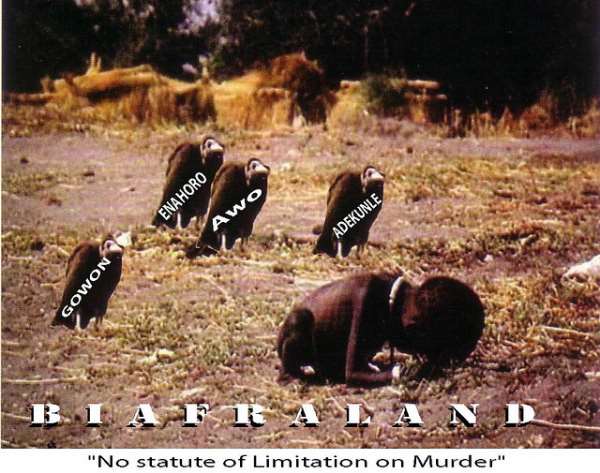 By Ikechukwu Enyiagu, [email protected]
A Solicitor & Advocate of the Supreme Court of Nigeria, who gave his name as Mr. Kunle Adegoke LLM, BL and his mobile contact number as 08023337003 has, on Dec 10, 2011, made public the unrepentant and anti-Semitic (anti-Igbo) position of the federal government of Nigeria and the law against the Igbo nation being upheld by the highest court of justice in Nigeria, the Supreme Court of Nigeria. In his speech, where he proudly waved the flag of his authority, Mr Kunle Adegoke said: “If they (the Igbo) attempt the same thing again (to demand their freedom), we shall wipe them off the surface of the earth.” Then he went further, in his native language, to fume: “Ebi loko yin (starvation is your albatross).” This genocidal statement and stance calls for an international intervention to save what is left of the Igbo nation within what is still referred to as Nigeria, seeing that the federal government of Nigeria is bent on remapping the world in which the Igbo will not have a history or a spot. The Supreme Court of Nigeria's Solicitor & Advocate went ahead to make mockery of the many children systematically killed by food deprivation in Biafra, and threatened that, this time, they would finish (wipe out every remaining child with deprivation of food) what they had started in 1967. What evil! What callousness! What effrontery! What impunity! This also calls for the swift attention of the International Criminal Court (ICC) in The Hague, International Human Rights Organizations, and all relevant bodies, to look, as a matter of urgency, into the facts of the 1967-1970 genocide carried out against Igbo in the South-Eastern part of Nigeria, to prosecute those involved in the pogrom which eventually took the lives of over 1.3 million Igbo in the Nigeria's invasion and genocide of Igboland and the Igbo, and to bring justice as a center standard for human rights declarations.

It should be recalled that, on October 30, 2005, The New York Times published a full transcript of the speech in which Mahmoud Ahmadinejad, the Iranian president, was quoted as having declared his intention that Israel be wiped off the map. In his speech to the "World Without Zionism" conference in Asia, entitled: Ahmadinejad: Israel must be wiped off the map, Mahmoud Ahmadinejad was quoted thus: “Our dear Imam (referring to Ayatollah Khomeini) said that the occupying regime (referring to Israel) must be wiped off the map and this was a very wise statement. We cannot compromise over the issue of Palestine. Is it possible to create a new front in the heart of an old front? This would be a defeat and whoever accepts the legitimacy of this regime has in fact, signed the defeat of the Islamic world. Our dear Imam targeted the heart of the world oppressor in his struggle, meaning the occupying regime. I have no doubt that the new wave that has started in Palestine, and we witness it in the Islamic world too, will eliminate this disgraceful stain from the Islamic world.” It should also be recalled that, ever since that statement was made by the 6th and current president of Iran, Mahmoud Ahmadinejad, the world has witnessed an upsurge of anti-Semitism, especially in the Islamic world, against Israel and its allies. The impacts of that poisonous statement made by the president of a strict Islamic Republic have reached every corner of the world, and are operational to this day. Although the statement met with vehement criticisms and rebuttals from different quarters of global governance, nevertheless, it went very far in reshaping the mindset of many young Muslims and served as a free tool for creating easy recruitments into terrorism. When a man who represents a nation could comfortably make such statements, no conjecture will properly capture the height of damages that will result from it- both against the nationals, and the peoples of the world.

It was never a secret that the Nigerian government, not only claimed it lawful the genocide against the Igbo, the seizure of Igbo money and property in different parts of what is still called Nigeria, but the systematic killing of the Igbo, even to this day, all over Nigeria, and especially the North. To buttress their point, the Supreme Court of Nigeria, a name which means itself, has sent one of their representative to publicly declare that, not only is the government unwilling to address the injustices unleashed against the Igbo which led to their secession in the 60s, but that the government (even when it's remained largely silent and unconcerned over the killings and marginalization of the Igbo still going on in Nigeria today), is ever ready to descent heavily again on the Igbo should they, out of the slavery burden, decide to secede again. And, from the Supreme Court of Nigeria, the choicest word to define their hatred against the Igbo nation was the one allegedly used by the Iranian president Ahmadinejad on Israel. To the Nigerian government, represented by the so-called Solicitor & Advocate of the Supreme Court of Nigeria, Mr. Kunle Adegoke LLM, BL, Igbo nation is as much of a threat to Nigeria as Israel is to the entire Muslim world (as claimed by Ahmadinejad). Therefore, what would serve them would be making sure that the Igbo are totally wiped off the face of the earth by the Nigerian government. This inhumane mindset has remained the only goal which has united other parts of Nigeria since the amalgamation.

It is very sad that the leaders of the South-East of Nigeria seem to either be fast asleep or largely ignorant; but I would not excuse them with any of these. Every Igbo should know that Ojukwu was the only true leader we all had; and now that he is gone, a Joshua must, of normalcy, emerge to bring us to the land we have all seen in our spirit. Our spirit on Biafra and the Igbo God-given freedom is one. And until then, no senator, minister, governor, or traditional ruler of Igbo extraction would stand to speak on behalf on the Igbo. Igbo youths know whom the spirit of Ojukwu naturally fell on, and until a pronouncement is formally made, none of the political leaders of Igbo extraction should be allowed to speak further blasphemy of “One Nigerianism” within Igbo soil. The Holy Bible says that the true enemies are the within a man's household. The Igbo will not allow themselves to be “wiped off the surface of the earth;” and just like the Israelites, we will put up an eternal fight to regain and maintain our God-given freedom, rights, and blessings. If the politicians of the Igbo extractions do not agree to the continued wickedness of Nigeria against our people, they must speak in unison- and speak now. And if the federal government of Nigeria and its Supreme Court want to distance themselves from the above-mentioned genocidal remark by their very representative, then Mr. Kunle Adegoke LLM, BL should be disrobed and sent out of any law court within Nigeria; and a clear and proper investigation into the genocide cases be kicked off.

Finally, it will serve as timely to warn those politicians of Igbo extractions who would not hesitate to sell even their very own parents to keep their blood-stained positions in this Babel of Africa called Nigeria, the Supreme Court of Nigeria, and the Nigerian government itself that the Igbo will never be wiped off the face of the earth. The Igbo will stand as a sovereign nation- away and distinctively of Biafra and not Nigeria. The Igbo will not be bound by the cord of corruption, crime, depravity, directionlessness and perpetual failure which characterize the Nigerian society among all of humankind. The days of Nigeria's jubilation of its genocide against the Igbo have come to an end with full justice on its trail. The future which the Igbo look up to is a future built and sustained in God, not a nation of false and bloody foundation; not a nation of Antichrists.