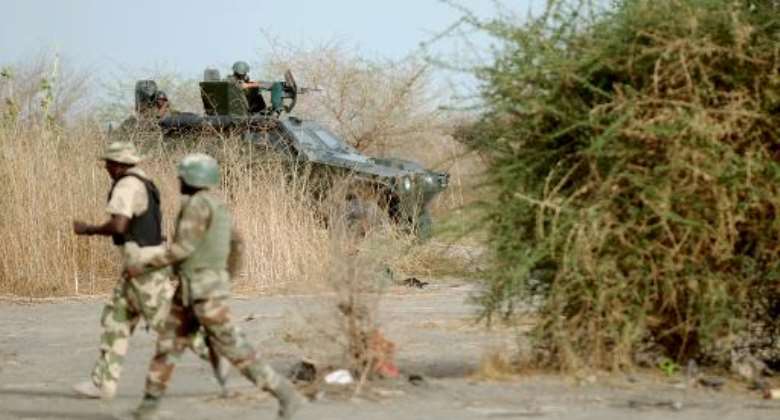 Soldiers on patrol close to a former Boko Haram camp near Maiduguri, northeast Nigeria on June 5, 2013. By Quentin Leboucher (AFP/File)

Maiduguri (Nigeria) (AFP) - Boko Haram gunmen killed many people in an attack on the town of Damboa in the restive northeast, throwing explosives into residential homes and shooting dead civilians who tried to surrender, an official and witnesses said Friday.

"The insurgents attacked the town from 6:30pm (1730 GMT) on Thursday to the early hours of today," said the official in Damboa's local government who requested anonymity. "They killed many people. Women and children fled into the bush," he added.

"Those who could not flee surrendered and were killed by the insurgents," he added.

The militants attacked a police station and an army camp in Damboa on July 6, chasing the security forces out of the town, which has been one of the hardest-hit areas in Boko Haram's five-year extremist uprising.

Damboa residents have been left unguarded since the previous attack, the official and witnesses said.

Resident Ahmed Buba said the assailants stormed as locals were preparing to break the Ramadan fast at sundown.

"We were defenceless because all the security personnel, including soldiers and policemen, have withdrawn," he told AFP.

Those who survived the overnight raid fled to the state capital Maiduguri and sought shelter in the palace of the area's top cleric, Umar Garbai El-Kanemi, also known as the Shehu of Borno.

The survivors "lodged a complaint with the Shehu because there are no security forces in Damboa," the official said.

The military was not immediately available to comment on the attack in the poor, remote region, which often has limited mobile phone coverage.