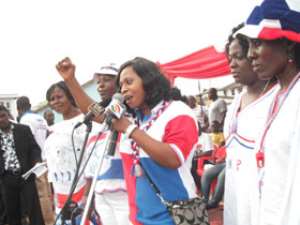 She said a combined team of police and military facilitated by the Ga East Municipal Assembly stormed the market and raided the entire market stalls, destroying the belongings of the unsuspecting market women.

A statement signed and copied to the Ghana News Agency in Accra on Thursday by the Member of Parliament aspirant said these women were deprived of a place to sell their wares.

“What is even more inhumane and nauseating is the ill timeliness of the raid; just around the time Christmas is fast approaching, a period where these sellers are supposed to sell and earn a living to celebrate the yuletide,” it noted.

The statement condemned the actions of the Assembly and called on authorities to apologise to the women and the necessary remedies made to them “in these trying times”.

It stated that the issue of the reconstruction of the market has come up over and over and consistent pleas to the assembly to find an alternative place for the market women has fallen on deaf ears.