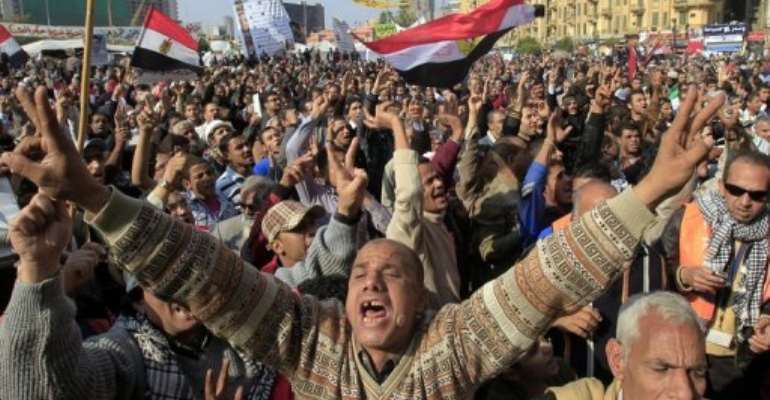 CAIRO (AFP) - Egypt awaited Friday the delayed publication of results for the opening phase of its first post-revolution election, with the projected rise of hardline Islamists causing unease among secular liberals.

The date for results has been pushed back twice from their initially scheduled time of Wednesday evening, with the delay blamed on high turnout estimated at above 70 percent in the Monday-Tuesday vote.

Two demonstrations were also called on Friday -- one against the army leaders overseeing the country's promised transition to democracy and another to support the regime -- but turnout was low by recent standards.

Millions of Egyptians embraced their new democratic freedoms this week in Cairo and second-city Alexandria in the first election since the toppling of the 30-year rule of president Hosni Mubarak in February.

The results at 1800 GMT were expected to show the Muslim Brotherhood, a moderate Islamist movement banned for decades under Mubarak, as the dominant force.

The group's Freedom and Justice Party (FJP) "will probably reach around 40 percent when all the votes are counted," said Salah Abdel Raouf, a spokesman for the Muslim Brotherhood in east Cairo.

Hardline Islamists who follow the strict Salafi brand of Islam are expected to have beaten secular liberals for second place and could emerge with as much as 20 percent of the vote, according to local media projections.

The results are for only the first part of a parliamentary election taking place in three stages, but the results will reveal the political trends that will shape a country that has not had a free vote in 60 years.

Only a third of constituencies voted this week in the election for a new lower house of parliament. The rest of the country will follow on December 14 and then on January 3.

"My father is seriously thinking about sending me and my brothers elsewhere because he thinks we won't have a future in the country with the Salafis," Nardine, a Christian banker in her 20s, told AFP.

A leading Salafi candidate to be the next president, Hazem Abu Ismail, aired his hardline views on society and religion in a television interview on Thursday evening.

Asked if he would allow his son to marry an unveiled woman, he replied: "I would tell him not to marry her... All Muslim women want to be veiled, but those who are not simply haven't had the strength."

Leaders from the Muslim Brotherhood, set to be the main party in parliament, have repeatedly stressed their commitment to multi-party democracy and inclusiveness, and have pledged to ensure freedoms.

The Brotherhood's FJP says it strives for a "civil state, defined as a non-military non-religious state... that respects human rights" according to its political programme.

The Brotherhood and other political parties are expected to face a fierce power struggle with the army to ensure the complete transfer of power to the new civilian leaders.

The FJP has already said it expects to be asked to form a new government to replace a new military-appointed administration set to be announced on Saturday.

The army leaders last week named a new caretaker prime minister, 78-year-old Mubarak-era politician Kamal al-Ganzuri, who is to unveil his cabinet at the weekend, according to state television.

Last week, 43 people were killed and more than 3,000 injured in violent protests against the interim military regime which is accused of looking to consolidate its huge political and economic power.

Analysts say Egypt, the Arab world's most populous nation and its cultural heart, faces a long, highly complex and uncertain transition to democracy amid growing growing concerns about the economy.

A SCAF official said on Friday that foreign reserves were dwindling and were only enough to cover imports for the next three months. The ruling military has agreed to lend $1.0 billion to the central bank, a military official said.