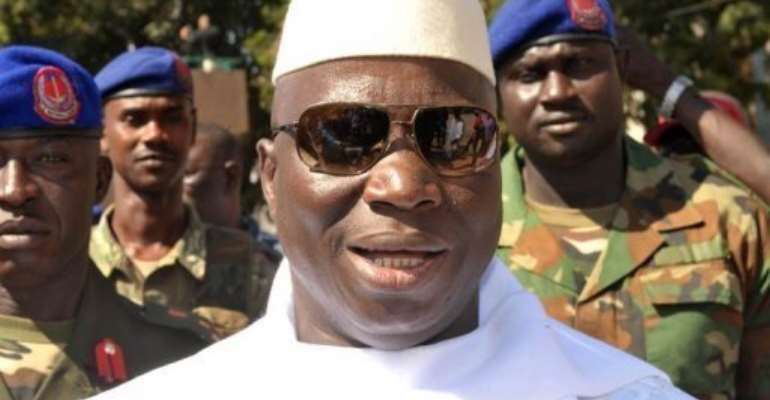 Jammeh has ruled Gambia since seizing power in a 1994 military coup. By Seyllou (AFP/File)

BANJUL (AFP) - Gambia's Yahya Jammeh won a landslide re-election to serve a fourth term at the helm of the tiny African state in presidential polls slammed by the opposition as bogus and fraudulent.

Thousands of citizens and soldiers swarmed into the capital of continental Africa's smallest nation to celebrate the victory of the 46-year-old former military officer with a 72 percent share of the votes.

The incumbent's main challenger Ousainou Darboe, 63, won 17 percent of votes in his fourth shot at the presidency while a third candidate Hamat Bah, 51, had 11 percent. Voter turnout was 83 percent of 800,000 voters.

Jammeh, a devout Muslim, said his win was a foregone conclusion and neither an election nor a coup could remove him from power -- only God.

Darboe told journalists his party "vehemently and unconditionally rejects the results of the just concluded presidential elections. The results are bogus, fraudulent and constitute a capricious deception of the will of the people."

This is Jammeh's fourth election win since seizing power of the former British colony in a 1994 military coup aged only 29 and he has increased his majority each time. He won 2006 polls with 67.33 percent of the votes.

"Gambians are development-oriented people and they know I can deliver. In 17 years I have delivered more than the British were able to deliver in 400 years."

Observers from the main west African bloc had boycotted the polls, saying Jammeh's control of the media and intimidation of voters meant the election could not be free, fair and transparent.

The 15-nation Economic Community of West African States (ECOWAS) reported "an unacceptable level of control of the electronic media by the party in power ... and an opposition and electorate cowed by repression and intimidation."

The regime of the man who says he can cure AIDS is often pilloried for human rights abuses, enforced disappearances, extra-judicial killings, torture and the muzzling of journalists.

Jammeh has woven an aura of mysticism around himself. He dresses in billowing white robes, never lets go of his Koran and brooks no dissent, heaping derision on criticism from the West.

"No Western country can tell me anything about democracy. In this country, we fear only God and I don't care what anybody says," he said.

Rights bodies have documented the deaths and disappearances of high-profile journalists in the country. Jammeh said Thursday journalists are "free to write what you like, but you should be ready to be accountable.

"Somebody said that this country is a hell for journalists, well there are freedoms and there are responsibilities. Being a journalist does not mean license to kill. Character assassination will not be accepted."

He has also threatened to "cut off the head" of homosexuals and has threatened the lives of human rights defenders.

Despite the criticism, Jammeh enjoys strong support for overseeing strong economic growth, which is set to reach 5.5 percent in 2011, and construction of roads, schools and hospitals.

"School, no teachers. Hospitals, no doctors," laughed a young electrician bitterly after voting closed. "What use is that?"

However in a country where half the nation is illiterate, and 67 percent of the population lives on less than $1.25 a day, Jammeh's threats to isolate regions who don't vote for him - which he has done in the past - win him votes.

This time round Jammeh won in each of the country's 48 constituencies. Gambia survives mostly off tourism, luring sun-worshipping Europeans to its sweeping, palm-fringed coastline, and agriculture.