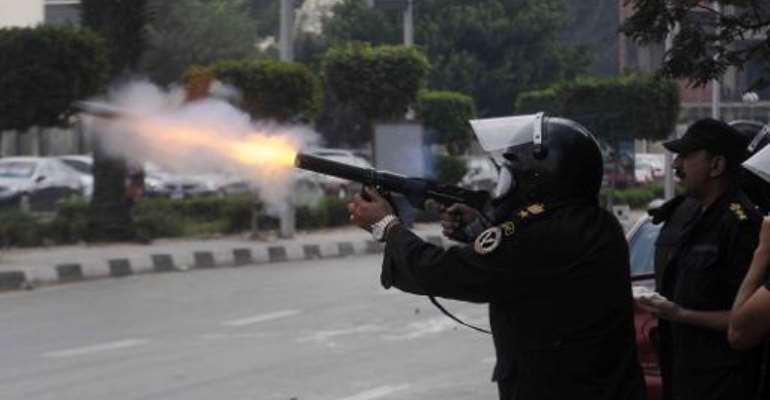 An Egyptian riot policeman fires a tear gas cannister towards demonstrating students of al-Azhar University who support the Muslim Brotherhood during clashes outside their campus in Cairo on December 9, 2013. By Tarek Wajeh (AFP)

Violence in and around the university's dormitory erupted when a few hundred students began protesting and poured onto nearby streets, security officials said.

A security official said students cut off the main road in front of the university and disrupted traffic, after which the police intervened.

The interior ministry said police fired tear gas to disperse the students and push them back into their dorms.

Another security official said 58 "rioting students" had been arrested.

The Islamist Anti-Coup Alliance which has staged regular protests backing Morsi called for new protests on Tuesday under the slogan: "Students lead the revolution."

Pro-Morsi protests have largely been confined to universities in recent weeks as security forces have cracked down on demonstrations elsewhere in the city.

More than 1,000 people have been killed and thousands arrested in a police crackdown on Morsi's Islamist supporters since his ouster.