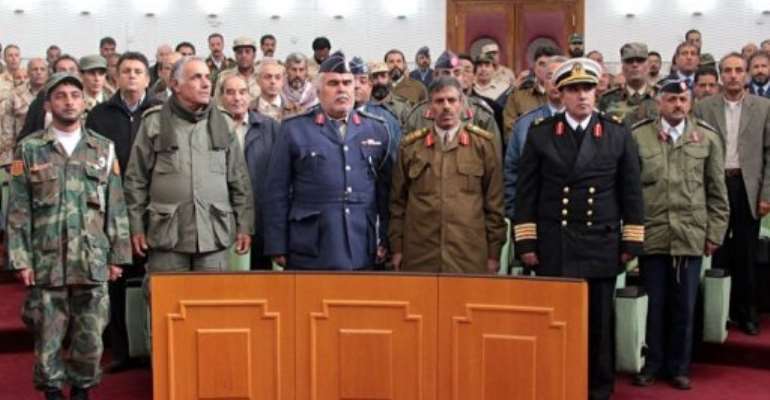 Commanders who defected from Moamer Kadhafi's armed forces in the heat of the civil uprising gather to name a new chief. By Abdullah Doma (AFP)

AL-BAIDA, Libya (AFP) - Commanders who defected from Moamer Kadhafi's armed forces in the heat of the civil uprising named a new chief on Thursday, presenting the new Libyan authorities with a done-deal.

Some 150 officers and sub-officers, gathered in the eastern city of Al-Baida, unanimously approved the appointment of Khalifa Haftar and announced the re-activation of the army, which has yet to be officially reconstituted.

"Participants agreed to choose Major General Khalifa Belgacem Haftar as commander in chief of the national army due to his seniority, experience and capacity to command troops as well as the efforts he made to support the February 17 revolution," said General Fraj Bunseira, head of Al-Baida's military council.

The nomination is to be presented for approval to the head of the governing National Transitional Council, Mustafa Abdel Jalil, Bunseira told an audience of senior military officers.

The announcement was welcomed by applause and cries of "God is greatest."

But it was met with silence in the capital.

Abdelhakim Belhaj, the influential Islamist commander of Tripoli's military council, told AFP he had not heard of the news and declined to make any immediate comment.

The naming of the army chief comes amid a growing rift between members of the national army and the defence ministry which oversees scores of brigades, formed by civilians turned fighters during the revolt against Moamer Kadhafi.

Haftar, who comes from the ranks of Benghazi's military academy and trained in the former Soviet Union, defected from the Kadhafi regime in the 1990s after the Libya-Chad conflict and went to live in the United States.

He returned home in March to join the military campaign to unseat Kadhafi.

Members of the old army were keen to take the lead before a formal meeting scheduled for Sunday to discuss the fate of the national army as they believe the defence ministry wants to keep them weak.

A new government is to due to be unveiled also on Sunday.

"Those people are against the military establishment," said General Suleiman Mahmud in reference to Defence Minister Jalal al-Degheili and his deputy, Fawzi Bukatif, who sought to bring former rebel militias under one unified command.

Some of the old guard officers expressed criticism of Qatar, which provided arms and training for Libya's inexperienced and ill-disciplined rebel forces.

"Qatar is welcome in the living room but not in the bedroom," Colonel Abdel Mottaleb Miled told journalists.

"We are grateful to Qatar for its help but there are limits... I say loudly and clearly that I do not like Qatar's methods," said General Mahmud.

He also called for unity in the army's ranks.

"I urge you to set aside personal rivalries. The core of the army is under threat. You must stand united. The army is a symbol of the nation," he said, before announcing his retirement to make way for younger officers.

Though many officer broke ranks and joined the NATO-backed fighters during the seven-month campaign to oust the Kadhafi regime, they are still viewed with suspicion by civilian brigades who took arms against the former strongman.

Be strong — Isaac Adongo consoles Bawumia with a cow for mot...
39 minutes ago