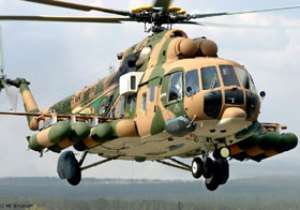 At a time workers are demanding salary increases, coupled with the Electoral Commission's complaint of not having funds to enable it undertake the verification of its proposed biometric voters' register for the 2012 general elections, the National Democratic Congress (NDC) led government has proposed for Parliamentary approval, the purchase of four helicopters to resource the Ghana Air Force.

A paper requesting for Parliament's approval to purchase the helicopters was presented on the floor of the House last Friday, which was referred to the joint Committees of Finance and Defense for consideration and report to the House by the Speaker.

Another paper requesting Parliament's approval of a medium term loan facility agreement between the Government of Ghana and the Fidelity Bank Limited, for the Ghana Cedi equivalent of 40.25 million euros to finance the purchase of two out of the four MI-171 SH helicopters, was also presented.

This decision was greeted with a heated debate on the floor of the House. The proposed purchases include a Brazilian-made Embraer E190 jet with hanger facilities, two Italian-built Breda BA 42 Guardian Surveillance jets, and another two CT 95 aircraft.

The Minority Leader, Osei-Kyei Mensah-Bonsu, accused the government of hypocrisy and corruption in the purchase of the five military jets, and claimed he 'smelled a rat' in the purchases.

The Minority in Parliament, mainly the opposition New Patriotic Party (NPP), abstained from the voting, which approved the purchase of the Embraer E 190 jet.

In the run up to the 2008 general elections, the NDC, then in opposition and forming the minority in Parliament, questioned the rationale behind the purchase of two foreign built jets. It accused then President John Agyekum Kufuor of engaging in profligate expenditure, when the country was hard hit by poverty, with workers demanding salary increases.

However, during his first State of the Nation's Address in 2009, President John Evans Atta Mills announced he would reconsider his predecessor's proposed purchase of two aircraft. 'I will impose austerity measures on government to ensure that we realise significant savings,' he said.

'As part of these measures, we will review the decision to purchase the aircraft. Ghana simply cannot afford the expenditure at this time.'

It is not clear whether the new proposal would suffer a similar ordeal, since the country is on the eve of another electioneering campaign, and both NDC and the NPP would use the move to score political points.

Checks for the specifications of the MI-171 SH helicopters by The Chronicle revealed that the facility is the export version of the dedicated military variant – that is Mi-8AMTSH.

It is one of the most intensively operated helicopters in its class, and was developed on the basis of comprehensive analysis of Russian helicopter operations in combat activities in local armed conflicts.

It is so well armed that it carries an array of armaments fit for the Hind-series helicopter gunship. They are officially designed, not as utility helicopters, but as combat transport helicopters.

Their duality ensures that they are able to sustain the enviable track record of the Mi-8/Mi-17 utility helicopter, and also carry a very formidable array of weapons such as would be expected of Mi-24 attack helicopters.

It has multi-purpose functions, and could be used for transportation and tactical assault landings of up to 36 troops. It could also be used to transport up to 12 casualties on stretchers accompanied by medics, or for the transportation of cargoes up to 4,000 kilogrammes in the cargo compartment.

It could be used for the highly-effective elimination of hostile manpower, armoured vehicles, water surface firing points, and other movable and stationary targets.

It could also be used for troop fire support, as well as escort military columns and for reconnaissance operations.

The MI-171 SH helicopter could also be used for civil operations (search-and-rescue operations) and fire fighting.