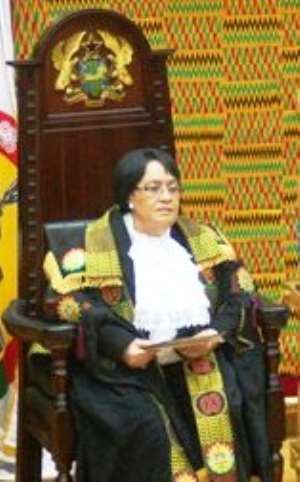 Accra, Nov. 11, GNA – A 19-Member Chinese delegation from China's National People's Congress on Friday called on the Speaker of Parliament, Mrs Joyce Bamford Addo, as part of efforts to strengthen bilateral relations between the Parliaments.

Mr Zhaou Tinog, Vice Chairman of the Standing Committee of China's National People's Congress, leader of the delegation, expressed satisfaction with the relations between the two countries.

He said the visit would forge closer links between the existing parliamentary relations with Ghana and share ideas for their mutual benefits.

Mr Zhaou recounted Ghana and China relations dating back to over 50 years and the need to maintain the good relationship between them.

He promised to donate office equipment to the Office of the Speaker.

Mrs Bamford Addo, recounted projects being undertaken by China in the country and said the visit would improve relations between the two countries.

Present were members of Ghana-China Parliamentary Friendship Association in Parliament.