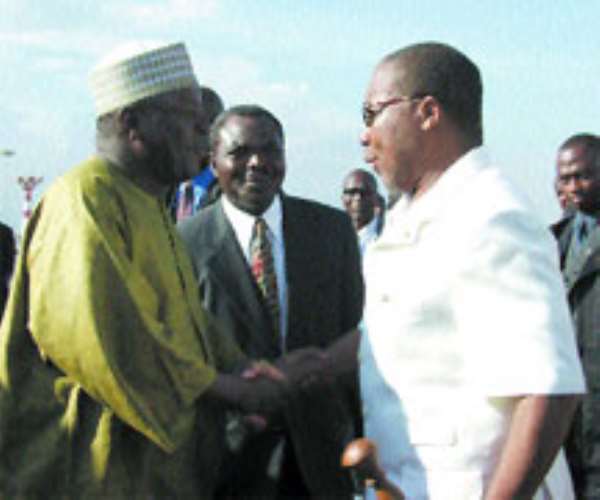 .......... Taylor arrives Liberia's President Charles Taylor and rebel leaders are scheduled to begin talks Wednesday in Ghana in an effort to end four years of civil war. The talks, organized by the regional grouping, the Economic Community of West African States (ECOWAS) and a U.N. backed contact group on Liberia, will be mediated by former Nigerian ruler Abdulsalami Abubakar. One report said the talks are expected to last as long as two weeks. Several African heads of state are expected at Wednesday's ceremony in the Ghanaian capital, Accra. Among them are South Africa's Thabo Mbeki, Nigeria's Olusegun Obasanjo, and Ivory Coast's Laurent Gbagbo. Sierra Leone's President Ahmed Tejan Kabbah and ECOWAS secretary-general Mohammad ibn Chambas are already in Ghana for the talks. The main goal of the talks is to arrange a ceasefire. Since 1999, the Liberian government has battled the northern-based Liberians United For Reconciliation and Democracy, (LURD), a rebel movement that seeks to oust Mr. Taylor. A new insurgency, called Movement For Democracy in Liberia (MODEL) emerged this year in the country's southeast. The conflict has displaced one million people within the country and sent 300,000 others fleeing to neighboring nations. As he arrived in Accra Tuesday, Mr. Taylor said he is committed to peace and that he will not leave Ghana until peace is achieved. Earlier, Mr. Taylor ordered the release of all rebels in government custody. The Liberian leader is under U.N. sanctions for fueling regional wars, notably for backing rebels in neighboring Sierra Leone who became notorious for causing severe injuries to civilians. AFRICAN LEADERS ARRIVE FOR LIBERIA PEACE TALKS Leaders attending the 2-week conference on Liberia which opens today have started arriving in the country. Those who have already arrived include President Charles Taylor of Liberia, President Ahmed Tejan Kabbah of Sierra Leone and leaders of political groups in Liberia. They were met on arrival by Alhaji Aliu Mahama, the Vice President.
At the airport to meet them were Nana Akuffo Addo, Minister of Foreign Affairs, Dr Kwame Addo Kufuor, Minister of Defence, Alhaji Mustapha Idris, Minister for Works and Housing and Mr Albert Kan Dapaah, Minister of Communications. Taylor arrives for Liberia peace talks Liberia's President Charles Taylor arrived in Accra on Tuesday at the head of a 62-member delegation for peace talks on his country.
He told reporters that a peace deal would have to be brokered before he leaves Ghana.
The peace talks open on Wednesday at the Accra International Conference Centre (AICC) and would continue at Akosombo and Akuse for two weeks.
President Taylor said there was no need for him to step down in order to facilitate peace in his country because he was democratically elected.
"I was democratically elected by 80 per cent of the people while 20 per cent took to the bush. Whether you are in the country or outside, I am still the President of Liberia," he said.
He said as a sign of compromise he had granted amnesty to a number of prisoners, who were arrested while fighting his government.
President Taylor noted that the idea that people took to the bush and then demand the removal of a sitting President should be discarded.
"If you a have a problem with the sitting President, there is a process which must be followed," he said. LIBERIAN TALKS WILL SUCCEED – AKUFO-ADDO Minister of Foreign Affairs, Nana Addo Dankwa Akufo-Addo, has expressed optimism about today’s peace talks aimed at resolving the long-festering crisis in Liberia. According to him, the acceptance of all the factions to a peace conference without pre-conditions was a clear demonstration of their commitment to finding a lasting solution to the crisis. He said, the talks was a golden opportunity for them to demonstrate that they have the interest of their country and the whole region at heart. He was speaking to newsmen after the United States Deputy Secretary of State for Africa, Mrs. Pamela Bridgewater, paid a courtesy call on him in Accra yesterday. Mrs. Bridgewater is leading the US delegation to the Liberian peace talks.
PIC: Alhaji Aliu Mahama welcoming President Charles Taylor