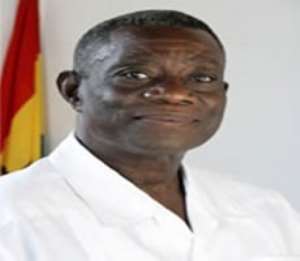 Policy think tank, Danquah Institute (DI) has raised an alarm over what it describes as the "strange and dangerous” manner in which the Mills-Mahama led National Democratic Congress government is trying to secure a $3 bn Chinese loan facility to finance a number of projects, including the Achimota-Ofanko Road, a $150 communications infrastructure for the National Security Council and a $100 million capacity building exercise for the Ghanaian SMEs.

The Parliamentary Joint Committee of Finance and Poverty Reduction is currently meeting in Koforidua, ostensibly to scrutinise, among others, the US$3 billion commercial term loan facility between the Republic of Ghana and the China Development Bank.

But in the view of DI, “this $3 billion omnibus loan facility is a very strange one which, in a very dangerous way, takes away the constitutional power of the legislature to scrutinise financial agreements presented to it for approval.”

A release issued and singed by Asare Otchere-Darko, Executive Director of DI, noted that this is the first time that a long list of project financial deals have been boxed under one agreement, presented without any details of the specific projects involved and Parliament is being asked to endorse them for the Executive to go and negotiate the details with the lender.

“We think it is a dangerous precedent which Parliament ought not to allow. What Parliament is being asked to do is to simply give its approval to a Chinese credit line of $3 billion and leaving the rest, the essential details that would determine the financial prudence of the transactions, for the Executive to handle,” the release added.

Even though DI is not challenging the importance of some of the projects listed, including the Accra Plains Irrigation Project and the Coastal Fishing Harbours and Landing Sites, the think tank finds it to be a “dangerous departure and watering down of Parliament's important constitutional role of financial scrutiny, for the $3 billion to be presented and approved in its omnibus form.”

DI has, therefore, urged Government to withdraw “this omnibus $3 billion facility from Parliament and, instead, present to Parliament for specific approval each of the projects involved with requisite details in order to allow the House to do proper financial and technical scrutiny to each project.”

According to DI, the facility is being secured with crude oil sales proceeds, which will be paid directly into an escrow account to be established offshore, against the established legal arrangement which stipulates that Ghana's 100% income from oil and gas should go into the Petroleum Holding Fund at the Bank of Ghana.

“Linked to this agreement are commercial off-take contracts with China for direct access to Ghana's share of oil from the Jubilee Field.

However, whilst the Chinese are under no obligation to agree to finance any of the specific projects contained in this omnibus $3 billion credit facility, we are still bound to supply them oil under the oil off-take agreements,” the release explained.

It added: “Under the escrow arrangement, the relevant permissible portion of the proceeds of crude oil sales under commercial contracts with the Chinese offtakers will be used to repay the $3 billion facility, which carries a total repayment cost, exceeding $4.2 billion.”

According to the release, the $3 billion credit facility is a commercial loan divided into two tranches of $1.5 billion each. The first tranche has a repayment period of 15, with the second tranche giving Ghana 10 years to repay the $1.5 billion and also at a commercial interest rate. Both facilities attract an interest rate of 6 months Libor + 2.95%, upfront fees of 0.25% per annum (or $7.5 million) and a Commitment Fe of 1.00% per annum ($30 million).