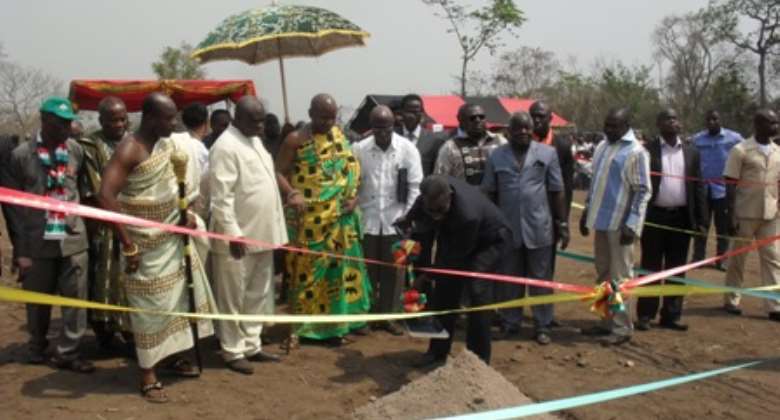 February 07, 2011
Ho, Feb. 07, GNA - President John Evans Atta Mills, on Monday, cut the sod for commencement of work on the University of Health and Allied Sciences (UHAS), in Ho, with a campus in Hohoe.

The two-hour historical event, which attracted a large gathering, was characterised by excitement at the site, at Sokode-Lokoe, about ten minutes' drive from Ho.

The joy of the moment was captured by Most Reverend Francis Anani Lodonu, Catholic Bishop of Ho, who spiced his opening prayer with the rendition of, "This is the day the Lord has made, we will rejoice and be glad in it,", which caught on with the crowd and they sang along.

President Atta Mills said the University, which would be established in two phases, would have eight schools, one faculty and two institutes.

He said the first phase would involve the establishment of the School of Nursing and Midwifery, Faculty of Biomedical Sciences, School of Sports and Exercise Medicine, as well as a School of Medicine in Ho.

President Mills said the Ho Sports Stadium would therefore be transformed into a sports complex to support the School of Sports and Exercise Medicine.

He said the School of Public Health, School of Allied Health Sciences, School of Traditional and Alternative Medicine and Faculty of Biomedical Sciences would be located in Hohoe.

President Mills said the second phase would involve the establishment of a School of Dentistry and School of Pharmacy in Ho, with the Institute of Medical Education and Institute of Health Research at Hohoe.

He said apart from the construction of a sports complex, government would refurbish and upgrade the Volta Regional Hospital and other health facilities, to provide office and laboratory space and classrooms to house the Faculty of Biomedical Sciences.

President Mills reiterated his government's commitment to investing in people and said the roadmap to fully integrate the 38 accredited teacher training colleges into tertiary education system was being pursued.

He said postgraduate studies would be strengthened and scholarships for graduate training streamlined as well as the promotion of research within the tertiary education institutions.

President Mills said support would also be given to public universities running distance learning programmes to enable them to expand their intakes.

He commended chiefs and traditional authorities in the region for offering plots of land for the University and also expressed gratitude to the Taskforce that did the feasibility studies.

Professor Sefa Dede, Chairman of the Committee for establishment of public universities, hoped the UHAS would help meet the shortfall in the training of healthcare professionals in the country.

"Health University is essential in the fight against poverty," he said.

Mr Joseph Amenowode, Volta Regional Minister expressed the region's appreciation to government and other stakeholders, describing the establishment of the UHAS as, "a divine plan of God and not by chance."

He was hopeful that UHAS would ensure the holistic development of the Volta Region.

Togbe Afede XIV, President of the Volta Region House of Chiefs commended government for honouring its promise to the region and pledged the preparedness of traditional authorities to support the work on the University.