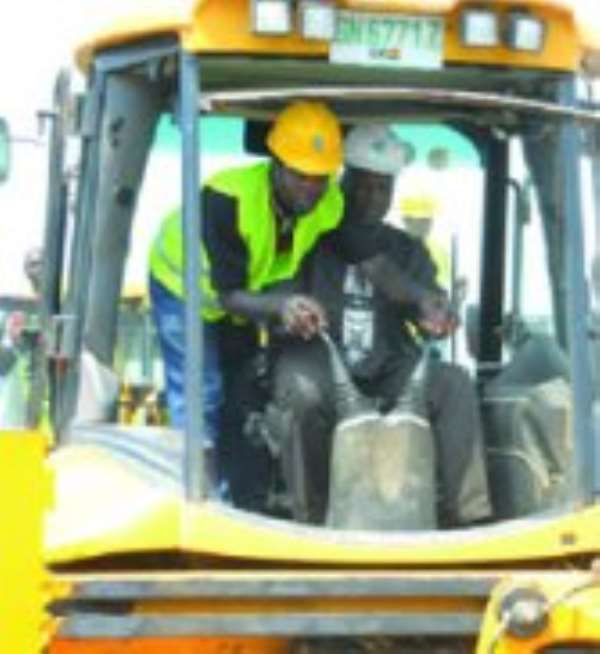 A $45.4-million project to provide a safe, fast and comfortable transport system in Ghana has taken off with a sod-cutting ceremony by Vice-President, Mr John Dramani Mahama.

Mr Mahama cut the sod for the start of work on the Bus Rapid Transit (BRT) under the Urban Transport Project which involves the creation of a dedicated route for buses from Kasoa in the Central Region to the Central Business District (CBD) of Accra.

It also involves the expansion of the bridge on the Odaw River and the construction of a flyover across the railway line.

There will also be traffic management works at some selected junctions to help improve traffic flow on the road and through intersections in Accra, Tema, the Ga West and East districts, Kumasi and Ejisu, while traffic lights will be co-ordinated to ensure the free flow of vehicles along the principal routes in Accra and Kumasi.

In all, the BRT project will be implemented in 11 metropolitan, municipal and district assemblies (MMDAs), eight in the Greater Accra Region, two in the Ashanti Region and one in the Central Region, all to be jointly funded by the Government of Ghana, the World Bank, Agence Francaise de Developpement (AFD) and the Global Environmental Facility (GEF).

Mr Mahama expressed worry over traffic congestion on the roads which increased travel time and created discomfort for motorists.

“The increasing transport congestion is becoming a nightmare to movement, with cars stuck bumper-to-bumper in traffic on major roads, including the Accra-Kasoa road,” he said.

Besides, Mr Mahama said, commercial buses, “trotros” and taxis, which take 70 per cent of commuters, “are old and badly managed”.

“Commuters become captive users of those vehicles and risk their lives,” he lamented.

Therefore, the introduction of the BRT “is going to revolutionise the transport system” in the urban areas of the country, he said.

He stressed that the BRT would ensure a safe, reliable, fast and cost-effective transport system in the country and “make Ghana the transport hub of Africa”.

Mr Mahama said the government intended to plan the country to cope with the growing population and said the BRT was one of the interventions.

He said the development of the transport sector had a bearing on Ghana’s development, hence the need for that sector to be developed now.

Mr Mahama asked people who would be affected by the project to bear with the government, since it was meant to improve the transport system and ease travel time.

The Minister of Roads and Highways, Mr Joe Gidisu, said the BRT would do away with the environmental and health consequences that commuters went through in the metropolises, municipalities and districts.

Deputy Minister of Transport, Mrs Dzifa Attivor for her part, said the introduction of high-occupancy buses which would have exclusive designated ways would make commuting within the cities less stressful, as it would reduce travel time.

In a speech read on his behalf, the Country Director of the World Bank, Mr Ishac Diwan, lauded the project, since he said, it had the potential to transform the transport system in the country.