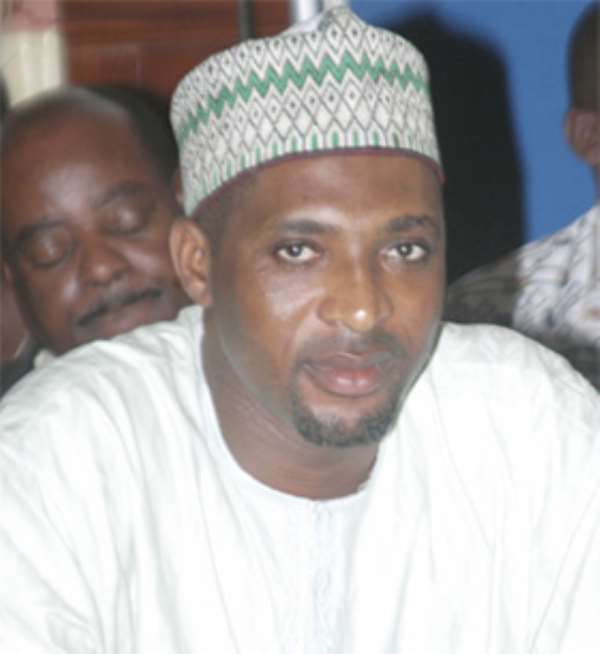 A MEETING between former Youth and Sports Minister, Alhaji Muntaka Mubarak and aggrieved National Democratic Congress (NDC) youth to resolve the impasse currently raging in the party in the Northern region ended in a deadlock.

The party's youth, whose recent outburst over happenings in the region is said to have prompted Alhaji Muntaka's visit in order to mediate in the matter, were seen engaging in hot exchanges in his presence over the conduct of party executives and officials.

The meeting, which initially begun on a good note with an Islamic prayer, ended with flaring tempers as both parties failed to reach a consensus regarding the issues tabled for discussion.

Youth Coalitions from Tamale North, Central and south Constituencies within the Tamale Metropolis, had planned to stage a demonstration against the Metropolitan Chief Executive (MCE), Alhaji Abdulai Haruna Friday, over claims that he was inefficient in handling issues as a mayor. Despite calls by executives of the party in the region for the irate youth to rescind their decision, the youth took an entrenched position and refused to kowtow to such calls, accusing the party of jilting them after winning power.

Sections of the youth said that prior to the 2008 general elections, they were tasked to support the NDC to win power but after two years in power, they were being relegated into the background.

Many blamed their executives for living flamboyant lifestyles while those of them who worked tirelessly to garner votes for the party to win power had been completely forgotten and abandoned.

They indicated that the mayor, who should have come to their aid, also abandoned them and the development of the metropolis, wondering if they could win more votes under Alhaji Haruna Friday.

To this end, the youth have decided to hit the streets to protest against the unfair treatment meted out to them by government, and have also called for the immediate removal of Alhaji Abdulai Haruna Friday, with the explanation that he was incompetent.

At the Regional Secretariat of the party in Tamale, where a crucial meeting was held to address their concerns, the Asawasi Member of Parliament (MP) appealed to the angry youth to rescind any decision to hit the streets.

He stated that their continuous public agitations were driving away floating voters who are major contributors in every general election, warning that should the agitations continue to spill into the public domain, the party would lose power in 2012.

The former Sports and Youth Minister advised them to channel their grievances through the appropriate channels to redeem the image of the party since internal wrangling might derail the party's chances.

His appeal however seemed to have agitated the youth, who almost engaged in fisticuffs but for the intervention of Mohammed Amin Adam-Abio, the Regional Youth Organizer of the party and the National Youth Employment Coordinator.

The meeting, as tempers rose, came to an abrupt end with the MP and his entourage promising to return and meet the leadership of the youth coalitions and leadership of the party in the region to help iron out their differences.