The World's Most Expensive Xmas Tree 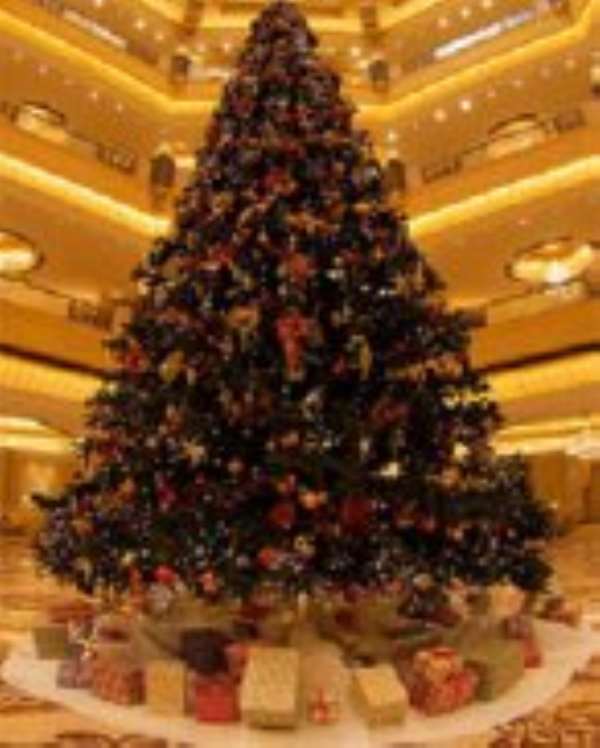 A Christmas tree decorated with over $11 million dollars' worth of jewellery has gone on display at the luxury Emirates Palace hotel in the United Arab Emirates capital, Abu Dhabi.

'This year, we partnered with Mr Khalifa Khoury, who is the chairman of Star Gallery and he has provided us with $11 million worth of precious stones and jewellery and that enables us to go for the Guinness world record for the most expensive Christmas tree,' said Janet Abrahams, Executive Director for Sales and Marketing at the Emirates Palace hotel.

The 13-metre high, diamond-decorated tree was placed under the main gold-covered dome of the hotel that hosts the world's first ATM gold machine that was introduced in the hotel earlier this year.

The hotel is trying to gain a listing in the Guinness World Records for having the most expensive Christmas tree in the world.

One hundred and thirty-one different jewellery pieces, including gold and precious stones, were provided by a local jeweller.

Tourists and visitors stopped for their picture to be taken near the unique tree or just to gaze at it in awe.

'What we are trying to do is to give everybody who visits and everybody who is staying here the chance to be part of something really special and unique,' Janet Abrahams said.

For Abu Dhabi's Emirates Palace hotel, where royalty and billionaires come for cappuccinos topped with gold flakes, the tree almost seems part of the furniture. — Telegraph

Inside Politics: Political Quotes
Catch up with all the political quotes from our politicians.
Sponsored
More Public Messages
Modern Ghana Links
Youth In Focus Ghana Mourns Rawlings
Greetings To All Muslims On The Occasion Of Islamic New Year 1442
Happy National Independence Anniversary To All Indians
Time For Sierra Leoneans To Seek The Face Of God Almighty For Guidance And Protection In All National Development Agenda
Happy And Peaceful Eid al-Adha - Francis Owusu-Akyaw To All Muslims
Have a Joyous Eid-ul-Adha Celebrations - Kwadaso MP
Message To Venezuela On 66th Birthday Of The Commandant
Commemorating 66th Birthday Of Commandant Hugo Chavez!
Secretary-General António Guterres Video Message On 75th Anniversary Of UN Charter
Election Reports Quotes Dossiers
TOP STORIES