Vice President Mahama in Prague for a Business and Investment Forum 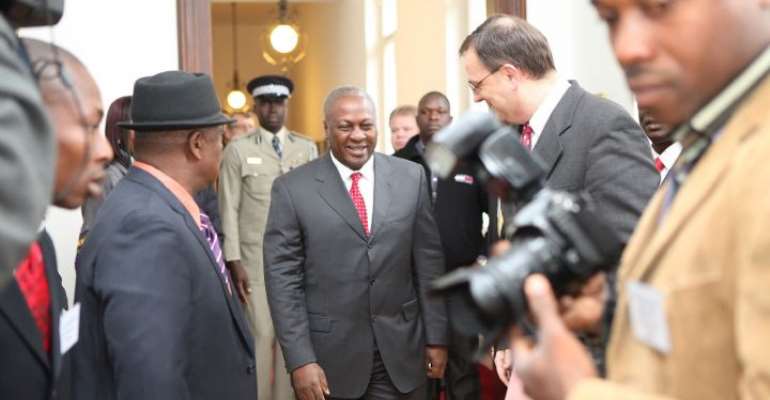 On 9th November 2010 the Czech Republic and Ghana converged at a trade and investment forum aimed at reviving economic and business ties between the two countries, ties that date back to 1959 when Ghana, the first African country to gain independence South of the Sahara, opened diplomatic relations with the then Czechoslovakia. An initiative of Humanitas Afrika - a civil organisation based in Prague and the Sub-Saharan department of the Czech Chamber of Commerce, the forum was organised by the Ghana embassy in Prague and attended by policy makers and business moguls from both countries. While the Ghana delegation was led by H. E Vice President John Mahama, that of the Czech Republic was led by the Prime Minister H. E. Petr Necas. The venue of this all-important forum was the Clarion Congress Hotel in Prague, the Czech Republic.

The attendance of H. E. John Mahama to the forum marked the highest Ghanaian official visit to the Czech Republic since the founder and first President of modern Ghana, Osagyefo Kwame Nkrumah visited that country in 1961. The President of Czechoslovakia at the time, Antonin Novotny, reciprocated Nkrumah's visit by travelling to Accra in 1962. The two leaders thus cultivated friendly relations between their two countries which was reinforced with economic cooperation. Czech experts and engineers were earnestly visible in helping the industrialisation effort of Ghana with building and running factories in the 1960s. But Czech economic relations with Africa did not begin with Ghana. In as far back as 1939, the Czech multinational shoe company, BATA, had established a regional head office in Gweru in present day Zimbabwe.

However when Kwame Nkrumah was overthrown in 1966 by a military junta that had the handiwork of the CIA written all over it, it also heralded in a long period in which Czech presence in Africa was to become highly minimal if not totally non-existent to the extent that today very few people in both the Czech Republic and Africa are aware of the role of Czechoslovakia in Africa's development history although diplomatic relations have always continued. Only last year (2009) the Czech Foreign Ministry in conjuntion with the Ghana Embassy in Prague and the Czech based NGO Humanitas Afrika commemorated 50 years of diplomatic relations. The trade and investment forum, coming on the heels of that commeroration as it has one year later, signals a new dawn of that mutually beneficial relationship been revived.

A release from the Ghana Embassy in Prague suggest that some of the expectations in organising the forum are to renew and re-establish meaningful economic ties between Ghana and the Czech Republic, and to welcome entrepreneurs from the Czech Republic to the exciting opportunites springing up in Ghana as a result of the discovery of oil and gas in commercial quantities. The areas mapped out for investment are oil and gas services including the petrochemicals industry, infrastructure and energy, manufacturing, agriculture and agro-processing, information and communication technology, tourism and financial services. The fact that the Ghanaian delegation was led by the Vice President himself provides testimony to the importance the President Mills administration is attaching to a broader scope of economic engagement with the outside world and especially with those countries with whom Ghana has had a history of sound economic cooperation.

In his speech Vice President Mahama thanked the initiators and organisers of the forum and reckoned it was timely and necessary. He fondly recalled the historic Ghana-Czech economic relations of the 1960s and hoped the forum would rekindle and foster a renewal. Subsequent to the forum the Vice President met and held bilateral talks with the Czech Prime Minister Petr Necas and His Excellency President Vaclav Klaus. Before his departure on 14th November 2010 he also visited the Czech Pilzen Technical Univesity and the Skoda Factory also in Pilzen, which is the fourth largest city in the Czech Republic. Everwhere he went he invited Czech companies to appreciate interest in Ghana and encourgad them to invest in Africa. He found parallels in the transformational success of Czechs and called for collaboration to help revive and rebuild African economies. The Vice President, who is highly regarded by many back home including this writer, was warmly received everywhere he visited. He interacted with the Ghanaian community in the Czech Repoublic during which he briefed his compatriots about the better Ghana agenda of the current government and answered a range of questions on the economy, security and development at home.

In this modern era where powerful nations are aggressively fighting for their sole interest by forming strategic partnerships, alliances and economic blocs, it is only prudent that African countries must not put all their eggs in one basket by remaining blindly attached to former colonial masters like America, Britain, France, Germany or even wit h recent economic power houses like China and India. On the contrary they should endeavour to learn how to cultivate stragetic interest for the benefit of their peoples by looking towards successful nations in Central Europe such as the Czech Republic. For as far as the interests of Africa and African peoples are concerned there is need to take wisdom in the saying of Kwame Nkrumah that “we face neither East nor West, we face forward”. 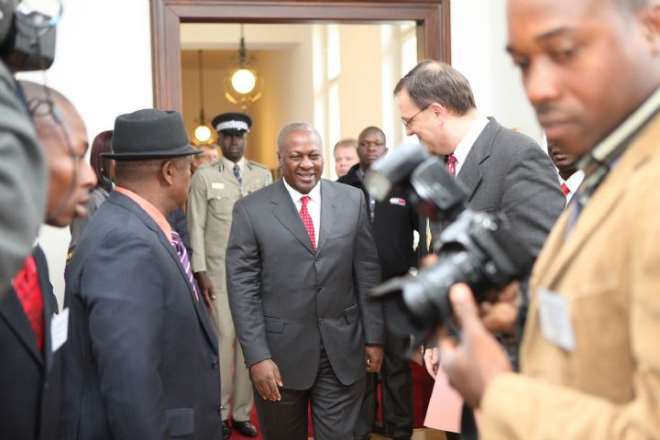 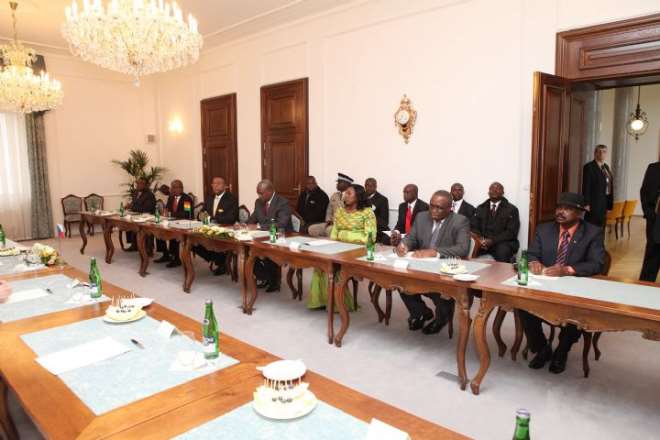