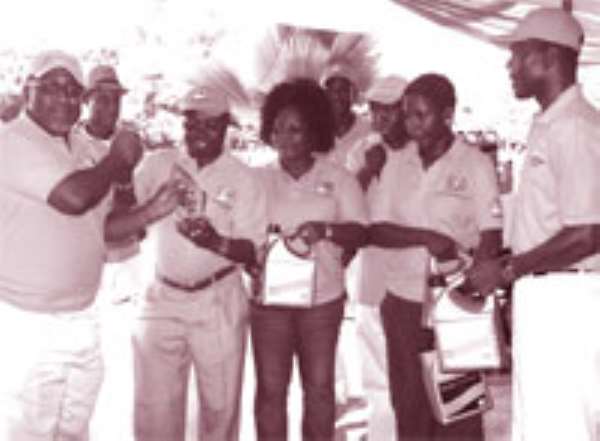 Bonus playing to handicap 16, consisted 37 gross each way, for a brilliant 58 net score to beat T. Melling 65 net and R. Streff Kerk 66 net for the men's main top prize of a crystalline trophy, and products of the sponsors, Goil Ghana limited.

Similarly Aku Yabah from Achimota gold club with 64 net beat Vida Adjei, Lady Captain of Tema Country Country Club who strolled one shot behind for the runner-up position with Aku Dovlo and Esther Amedzro both with 70 net a piece following.

Mananging Director of Goil, Mr. Yaw Agyemang Duah expressed profound joy for being part of such an auspicious event to commemorate this year's farmers' day, a day set aside to honour our hard working farmers and fishermen.

He said Goil is increasingly becoming a key partner with golf, as 'we have demonstrated our passion for the sport, having become title sponsors of the annual senior competition of the Ghana golf association for almost a decade.'

He reiterated Goil's continued fraternal relationship with golf, and asserted the recent sponsorship event at Takoradi to mark Goil's 50th anniversary and the country's emergence into oil exploration, which has given the nation's giant oil suppliers, a responsibility we cannot shirk.

'We will continue to create and share the good things in oil with golfers,' he said, and congratulated all winners who received excellent products of the company'.

Club Captain, L. Gbevlo-Lartey, in a closing remark thanked GOIL Ghana for supporting the event, various officers and men of the Ghana Armed Forces and invited dignitaries for being part of the celebration to honour farmers and fishermen.

He further commended 'the group' for exhibiting a high sense of discipline throughout.