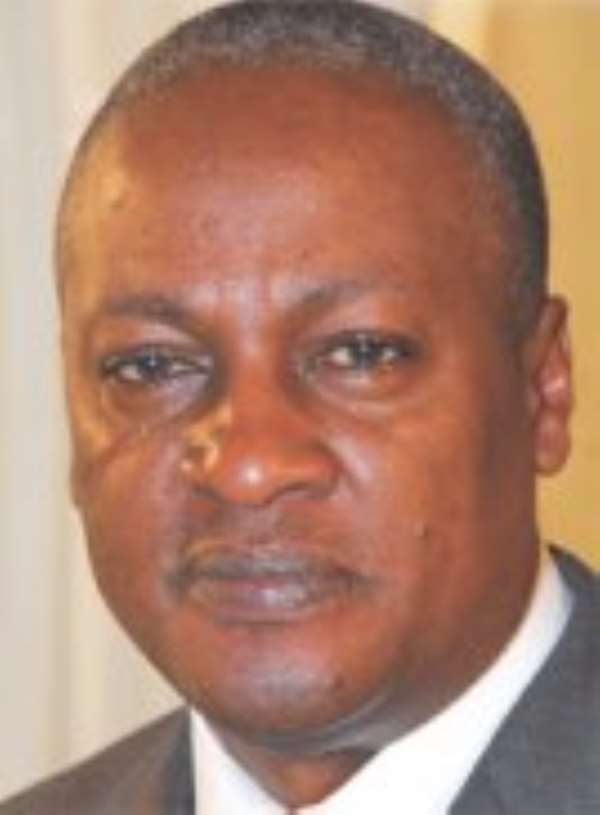 Vice-President, Mr John Dramani Mahama, has expressed his preparedness to appear before the Commission on Human Rights and Administrative Justice (CHRAJ) or any lawful authority to clear his name regarding his alleged involvement in the Armajaro cocoa smuggling case.

“All the time public officials are being denigrated without any good cause, but this is a very good test. I am very happy that I will go to CHRAJ, hoping that that threat to drag me before CHRAJ is not a phantom,” the Vice-President dared.

Answering questions from journalists at the Castle, Osu in Accra yesterday, after briefing them on the gains from his recent trip to the Czech Republic, Mr Mahama expressed surprise that although he offered explanations on his non-complicity in this case, “my detractors still persist with their agenda”.

An article on Ghanaweb.com of November 11, 2010 on the Armajaro cocoa smuggling case suggested that the Vice-President might have taken a bribe from certain British political dignitaries to direct the reinstatement of Armajaro with the Ghana Cocoa Board (COCOBOD).

Mr Mahama denied any complicity in the matter, saying that he did no wrong in that matter.

He said although the issue on the ban of Armajaro (GH) Ltd had been raised with him in London, he had directed the British officials to petition the sector minister for redress.

“If that advice [coming from me] as a Vice-President meant I was paid money to intervene on Armajaro's behalf, I will be very glad to appear before CHRAJ,” he said.

Already, COCOBOD has cleared the Vice-President of any interference in its decision to lift the ban on Armajaro.

In a press release issued in Accra, COCOBOD explained that its decision to lift the ban had not been influenced by the Vice-President in any way, as had been speculated by a section of the media.

The Vice-President used the occasion to apologise to Muslims for the inability of 300 pilgrims to undertake the trip.

Mr Mahama explained that the Saudi Embassy had been issued with instruction from Saudi Arabia to consider the issuance of visas to the remaining 300 pilgrims, noting that while the counsellor had indicated his readiness to do that, it was prevented by the ambassador.

Additionally, the embassy had demanded evidence of payment for accommodation and transport for the extra pilgrims and that that had been made available, as was confirmed by a letter to the embassy.

On the trip to the Czech Republic, Mr Mahama said the Czech government had expressed its willingness to support the Government of Ghana to establish a modern urban rail system and help revive some of Ghana's defunct factories.

It had also agreed to share its technological and other professional expertise with Ghana to generate more power and transmit electricity to both domestic and external markets.

These decisions were taken when the Vice-President paid a courtesy call on Mr Petr Necas, Prime Minister of the Czech Republic, at his office in Prague.

Their meeting centred on three major issues of power and electricity generation, urban transport and the maximum use of oil and gas in the country soon after the exploitation of oil.

Vice-President Mahama appealed to the Prime Minister to send a team of experts to Ghana to undertake estimates and all the necessary projections for the government to embark on the urban rail system, which he said would not only decongest the major cities of the country but also help create more jobs for the unemployed.

He noted that the jute, shoe, sugar and tyre factories that were established by the Government of Ghana, in collaboration with the Czech Republic, were all grounded and called for better collaboration that would revive those factories at their various locations.