Anas and the President’s door-to-door surprises 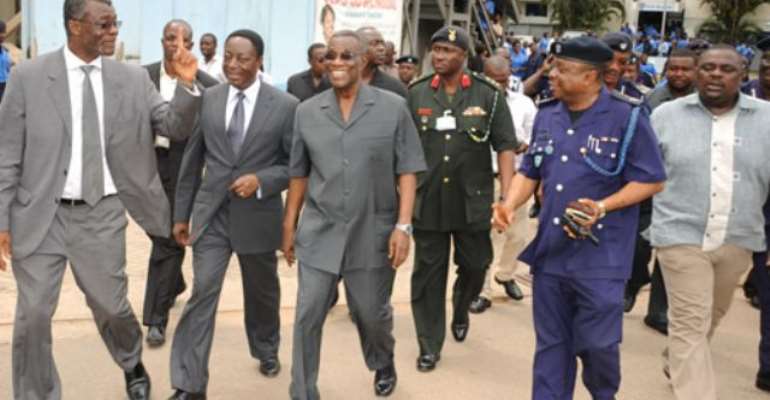 President Mills and his entourage at CEPS

The fact that it is impossible to please man has come to the fore in recent times. During the last political administration, Former President Kufuor was widely criticized for travelling too much. Though reasons were given for those visits, his critics said he could have delegated his vice president to embark on some of those foreign trips. To them, his foremost mandate was to be abreast of the problems at home and fix them. President John Atta Mills is doing what the critics of former President Kufuor wished but he has not escaped criticisms either. To them, the president has delegated too much foreign visits to his vice, Mr. John Dramani Mahama, a phenomenon some have linked to his health. The Minister of Information, Mr. John Tia has emphasized that the president delegates some of the foreign trips to his vice in order to have much time to concentrate on the affairs of the nation but this is not enough to silence sworn critics of the president.

However, the recent unannounced visits by the president to some important state organisations in the country are very laudable, following some revelations and actions taken in the wake of those visits. After the startling revelations by an investigative journalist, Anas Aremeyaw Anas, about the appalling conditions at the Accra Psychiatric Hospital, the Minister of Health and his entourage visited the hospital and set up a committee to look into the matter. This notwithstanding President Mills last week paid a surprise visit to the mental hospital and see things for himself. Mental health care in Ghana has received very little attention despite the expert assertion that all persons are potential mental health patients. The announcement of an increment in the feeding grant to GH¢2 for inmates at the psychiatric hospital is refreshing, and it is hoped that the President will help expedite action in the passage of the mental health bill and the subsequent improvement in the plight of mental patients in the country.

The president also paid unannounced visits to the revenue mobilization agencies in the country. He took the Ministry of Finance, the Internal Revenue Service and the Customs, Excise and Preventive Service (CEPS) by surprise when he called on them unannounced.

The president did not mince words when he expressed his disgust at the corrupt practices by some CEPS official whose activities deprive the country of huge amounts of revenues. Thanks to the exploits of Anas Aremeyaw Anas, he has seen who those game keepers posted at the country's entry points have become hunters. These nefarious activities range from under invoicing of imported goods to aiding of smugglers of cocoa and other export commodities. At the Tema harbour, people took to their heels upon seeing Ghana's Prince of Peace. While the President must be commended for initiating these visits to have first-hand information on these institutions and agencies it must not end there.

Those faces of CEPS officials, soldiers, police, national security operatives and their conspirators shown in Anas Aremeyaw Anas, must not go unpunished.

The revenue mobilization agencies have a great say in how much comes into the national purse and steps must be taken to cripple the activities of these corrupt officials. In this era of ICT, the necessary monitoring systems should be acquired to monitor those whose activities do not only bring their agencies into disrepute but also deprive millions of Ghanaians a decent livelihood.

All Ghanaians owe it a duty to discharge their duties to the country in the best way they could and if any person or groups of persons are bent on wrecking the nation, then their trade must be made unattractive. After all, at the end of the day it is the government and policy makers who are usually blamed for woes of the land and if the president has identified some people whose activities are detrimental to the development of the nation, then we all expect him to do what ought to be done to bring them to book.

But I have a warning for Ghanaians, especially those who transact murky businesses at their work places. Expect a visitor. You can run away when it is President Mills. Like a Hollywood star, his face is known to even children. But if the visitor is Anas Aremeyaw Anas, it will be a different story. In fact, Anas deserves the highest award of our land. An award greater than what former president Kufuor carved for himself.

What do you think?
Credit: Manasseh Azure Awuni [www.maxighana.com] Email: [email protected] The writer is the SRC President of the Ghana Institute Journalism and Press and Information Secretary of the Northern Students' Union (NSU). To read more of his writings, visit www.maxighana.com