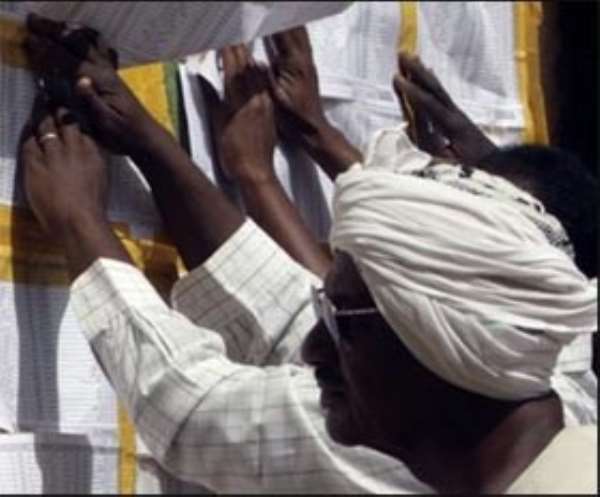 Voters in Sudan are casting their ballots in the first multi-party elections in 24 years.

The polls for president, parliament and state assemblies are being held as part of the peace deal that ended the civil war between north and south Sudan.

But several key parties and politicians opposed to President Omar al-Bashir are boycotting the vote amid fraud fears.

The elections are also complicated by the ongoing low-level civil war in Darfur, where some three million people are living in refugee camps.

The BBC's Mohamed Khalid, in the Darfur city of Fasher, says the turnout is surprisingly high, amid tight security.

However, there are no reports of any rebel attacks.

"We want the election to bring change and peace and to help us go back home," Adam Isa, a middle-aged man, told the BBC at the al-Salam refugee camp.

The 16 million registered voters have until Tuesday to vote but some turned up on Sunday before polls opened to make sure they could cast their ballots.

The elections are meant to be a significant moment for Sudan, marking the transformation from a military and Islamist government to a democratic one, but the election has been marred by the number of withdrawals.

Local election monitors in Khartoum are reporting that some election officials are going into polling booths with voters and instructing them to vote for President Bashir.

The National Elections Commission had insisted that the three days of voting would be free and fair.

But this failed to convince the parties opposed to President Bashir, who pulled out in protest at alleged plans to rig the vote.

President Bashir needs a democratic mandate since being indicted by the International Criminal Court for alleged war crimes in Darfur, says the BBC's James Copnall in Khartoum.

The boycott by his two main challengers mean he is favourite to be re-elected but is likely to reduce that mandate, our correspondent says.

Former US President Jimmy Carter is leading one observer mission.

"It's not going to be a perfect election - there are no such things," he said in Khartoum.

"But if we feel that in the elections the will of the voters has been expressed adequately then that would be the primary judgment we will make."

He then raised his index finger to show the voting ink, shouting "Allahu Akbar" (God is great), reports the AFP news agency.

The polls are extremely complicated - all the more so because the names of those who have withdrawn over the past two weeks are still on the ballot papers.

"I am voting for SPLM's Yasir Arman for president of Sudan," Elijah Garang told the BBC at a cattle camp outside Juba.

"Even if he has withdrawn, he is my candidate and I will vote for him."

The elections are also a huge logistical challenge for a country where where the infrastructure is poor.

In Southern Sudan, which already has considerable autonomy, 12 separate elections are taking place - for regional representatives, as well as local and national ones. Source: BBC