Ghana won't be base for attacks - Minister 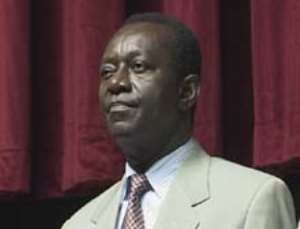 The Minister of Defence, Dr Kwame Addo-Kufuor, has stated that Ghana will never allow her territory to be used as a base for soldiers and ministers from Cote d’Ivoire.

He categorically denied that some Ivorian government soldiers and ministers are using Sampa, a border town in the Brong Ahafo Region, as a base from where they travel daily to conduct their operations in the crisis-ridden country.

Dr Addo-Kufuor was speaking on a Kumasi radio station yesterday in reaction to a publication in an Accra private newspaper of October 14, this year, which said Sampa had become the base for some soldiers and ministers of Cote d'Ivoire.

He said investigations he ordered following the publication revealed that it is the district political head of Bondougou who had sent his family to Sampa. The minister said such publications could create adverse effects for the stability of the nation and the sub-region and called on journalists to be circumspect about their reportage of the events in Cote d'Ivoire.

Dr Addo-Kufuor said Ghana is safe and there is no reason for anybody to panic as a result of the confusion in Cote d'Ivoire.

He stated that the government of Ghana has made it clear to the Ivorian authorities that Ghana cannot unilaterally do anything to help them. The minister said any assistance would be under the umbrella of the Economic Community of West African States (ECOWAS).

He, however, stated that some men are on stand-by in case the call comes from ECOWAS for the nation to contribute men for any intervention.

He said although there is a huge Ghanaian population in Cote d'Ivoire, just a small number of about 300 have returned home since the disturbances broke out in that country. Dr Addo-Kufuor said the government has made adequate preparations to transport Ghanaians who want to return home. He said two ships and a number of buses have been put on standby to transport such persons home if the need arises.

In a related development, the First Deputy Speaker of Parliament, Freddie Blay has requested the Ministers of Foreign Affairs, Defence and the Interior to brief the House on how the government is monitoring the situation in Cote d’Ivoire.

This followed concerns expressed by members during their contribution to a statement on “the role of Parliament in the Implementation of the New Partnership for Africa’s Development (NEPAD),” at yesterday’s sitting.

In the said statement, Kosi Kedem, NDC member for Hohoe South said what is happening in Cote d’Ivoire, the country’s immediate neighbour, poses a great challenge to NEPAD adding that “it can mar its very existence”.

He said the unfortunate tragedy that is unfolding in Cote d’Ivoire should be seen within this context stressing that “for us in Ghana, it is very clear that war, the African plague, is at our gates.”

He said there is no way Ghanaians can sit and pretend that events in the neighbouring country cannot affect them and urged the government to come out and make a definitive statement to Parliament on Ghana’s preparedness to contain the Ivorian situation and mitigate its effects on the people.

Kedem, who is the co-ordinator of the Association of European Parliamentarians for Africa (AWEPA), briefed the House on the association’s three-day meeting which was recently held in Accra on the theme “The role of Parliament in relation to NEPAD, sustainable development and HIV/AIDS.”

He said the conference was held mainly to create more awareness about NEPAD and define the role of African Parliaments in marketing and implementing NEPAD in order to provide adequate and timely information in supporting the implementation process.

He said notwithstanding some weaknesses of NEPAD, the participants at the conference overwhelmingly supported it and strongly recommended that African Parliaments should actively participate in the marketing and implementation of the policy and urged the Ghanaian Parliament to join hands with other African Parliaments to achieve this objective.

Contributing to the statement, Mr Kwabena Okerchiri-Adusa (NPP, Nkawkaw) said Africa will need about $64 billion a year to support the successful implementation of NEPAD and expressed the hope that the group of eight industrialised countries (G 8) will assist in this respect.

George Isaac Amoo (NPP, Ayawaso West-Wuogon) said with the events in Cote d’Ivoire, Ghanaians need to be assured by the Interior Ministry that the people are safe. John Kwekucher Ackah (NDC, Aowin Suaman) urged governments in the West African sub-region not to rely solely on the developed countries to provide them with all their needs but to co-ordinate efforts and take bold measures to develop the continent.

Modestus Ahiable, (NDC, Ketu North) stressed the need to subject the NEPAD document to parliamentary debate to enhance greater understanding to enable member countries to derive maximum benefits from it.

James Victor Gbeho (Ind. Anlo) said although African countries have always expected assistance from western countries for development, this form of assistance had been in trickles and not in the quantity needed to effect a positive change on the socio-economic status of the people.

Stephen Balado Manu (NPP, Ahafo Ano South) said the mere change of the Organisation of African Unity (OAU) to the African Union (AU) does not provide an automatic answer to the problems of the continent adding that “it is necessary for African governments to think of solving the problems of hunger, poverty and disease plaguing the continent rather than spending money to import arms to kill our own citizens”.

Alhaji Mustapha A. Idris, Deputy Minister of Foreign Affairs and NPP member for Gukpegu/Sabongida, said the new dispensation sweeping all over Africa calls for democracy and good governance, pointing out that this will be meaningless unless it is tied the provision of basic necessities of life for the people.

On the situation in Cote d’Ivoire, the deputy minister said it is a delicate issue because of the likelihood of its spill over effects.

He said this calls for circumspection and the highest level of diplomacy at all levels to ensure a peaceful resolution of the problem. The Minister of Defence and acting Minister of the Interior, Dr Kwame Addo-Kufuor, was in the House to answer six questions.

He, however, expressed concern about what he termed reports of unfortunate incidents of alleged rape of some female suspects by some policemen and said the police administration will thoroughly investigate such occurrences and those found to have misconducted themselves, dealt with.

In answer to another question by Mrs Theresa Joyce Baffor (NDC, New Edubiase), Dr Addo-Kufuor said the Ghana Police Service, with assistance from the Chinese Government is to provide permanent offices and barracks for towns where private buildings are being used for the operation of these facilities at a cost of $5 million.