Ghanaians to lose US airport jobs 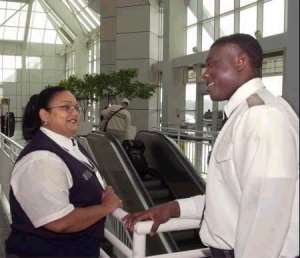 DENVER (AP) - At least 80 immigrants who work as security screeners at Denver International Airport will lose their jobs next month when the federalization of airport security is complete. When Congress approved a new aviation security bill after the 9/11 terrorist attacks, lawmakers required screeners to be U.S. citizens and proficient in English. The Transportation Security Administration takes over airport screening from private companies Nov. 19. Some workers in Denver call the law unfair, noting that non-citizens are allowed to serve in the military. ''We have the experience. We trained these people to take our jobs,'' said Morocco native Abdel Tazi, 31, who became an airport screener last November. So far, between 700 and 800 federal screeners have been hired at the airport, with about 200 employees hired from Wackenhut Corp., the private security company now in charge of airport security. Wackenhut still has more than 200 of its screeners working in the airport, said area manager Robert Bobo. About 80 of those workers are not U.S. citizens. Screeners who stay with the company through the government takeover will be eligible for bonuses up to $2,000, he said. ''The reason we're staying is not for $2,000, but because we still want to serve the public, serve the United States,'' said Wackenhut employee and Sudan native Mangar Amerdid. The TSA plans to pay federal screeners $23,600 to $35,400 a year, depending on experience and lead screeners can make $46,700. Most immigrant screeners are resigned to the impending loss of their jobs. ''We're fighting a losing battle. Still, life goes on. We're happy we're in this country,'' said Ghana native Boateng, who expects to become a U.S. citizen next month. Tazi also expects to become a U.S. citizen but he would rather focus on the office-cleaning company he has already started. Amerdid, who's studying computer information systems at Community College of Aurora, shows no bitterness about losing his job. ''America is a big land. I can go anywhere and find a job,'' he said.