Hope for Ivory Coast after Accra-meeting 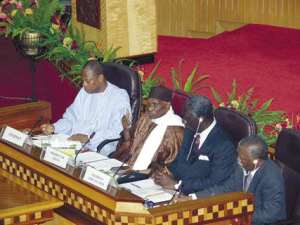 BOUAKE, Ivory Coast - An agreement among West African leaders held out the possibility of mediation to end a 12-day rebellion in Ivory Coast that has left hundreds dead and swathes of the country under rebel control. French and U.S. forces airlifted the last big group of foreigners from behind the lines of rebels who hold much of the north and centre of the world's biggest cocoa producer. West African countries worried at the crisis in the region's second-biggest economy ended an emergency summit in Ghana on Sunday, pledging to send a military force if mediation between the government and rebels failed. President Abdoulaye Wade of Senegal said the 15-nation Economic Community of West African States would immediately begin negotiations between the two sides. If that failed, the regional bloc's military wing, ECOMOG, would swing into action. Rebel commander Tuo Fozie declined to comment on the agreement, but left the door open to the idea of talks with the government. "If it's in aid of peace, we are ready," he said by telephone from Ivory Coast's second city of Bouake. Arriving home from Accra, President Laurent Gbagbo did not comment on the possibility of talks with the rebels but said he was very happy with the result of the summit. "There was unanimous condemnation by the 15 of the attack on Ivory Coast," he said. DIPLOMATS SEE PROBLEMS Diplomats anticipated problems in persuading the Gbagbo government to deal directly with the rebels, which it says are terrorists in the pay of an unnamed foreign power. Ivory Coast suspects northern neighbour Burkina Faso, whose President Blaise Compaore was at the summit. Burkina Faso is unhappy at the harassment of some three million of its people living among the 16 million in Ivory Coast. The rebels first said they were mutineers protesting at unfair army retirements, but now make clear they aim to reach Abidjan, Ivory Coast's commercial hub on the Atlantic coast. The rebels have not said who their leader is. State television showed pictures on Sunday of several young men it said were fighters who had surrendered near the rebels' forward positions, just 50 km (30 miles) north of the official capital Yamoussoukro. An army spokesman said troops shelled enemy outposts late on Saturday in the drive to recapture rebel territory -- which now covers most of the northern strip along the borders of Mali and Burkina Faso. French and U.S. troops airlifted about 400 Europeans, Americans and Africans from the rebel-held opposition stronghold of Korhogo on Sunday, evacuating the last major pocket of foreigners remaining behind rebel lines. French troops last week opened a safety corridor from the second city of Bouake, allowing hundreds of foreigners to escape the city. Areas of Bouake visited by a Reuters team on Sunday were calm and under the control of a small rebel force -- some fighters wearing flip-flops and swilling beer in a picture that could have come from almost any of Africa's rebel wars. "We want true democracy," Fozie said. "When we get to Abidjan we will give politics back to the politicians."