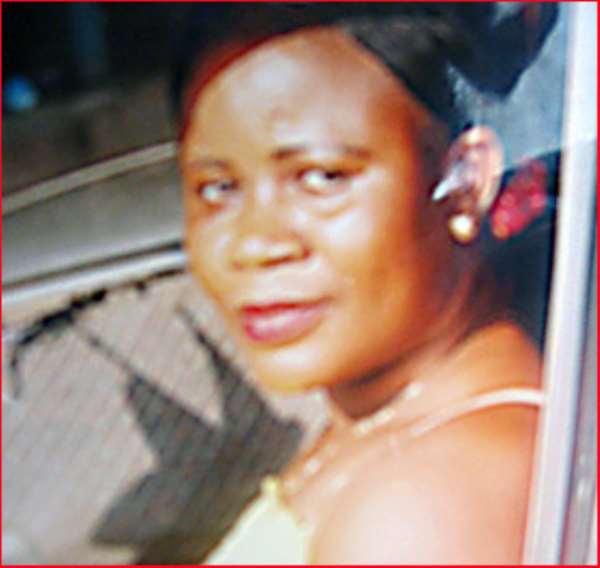 SHOCK AND misery rocked Bedwoase, a farming community in the Amensie Central District of the Ashanti Region yesterday after a 55-year-old hunter gunned down his wife in Hollywood movie style and fled.

Akwasi Tabi, an elder of Salvation Bethel Church at Homase No.1 near Bedwoase, took the bloody action after returning from a morning church service around 7.00am on Sunday without showing any signs of frustration and anguish to merit such an incident.

Yaa Baby, a mother of six, was shot at the back at close range with a double-barrel gun by her husband, who has not paid her bride price and was harbouring hatred for the woman after she served notice to divorce him.

Tabi shot her when she went to the house to collect the dirty clothes of her children for washing.

According to Vida Tabi, 13-year-old daughter of the deceased, her mother, around 7.00am, came to her father's house where they (children) had been living since the separation, to collect their dirty clothes for washing.

“She asked my father to open a door to the room where our clothes and other belongings were, and an exchange of words ensued between them. My father dashed into his room and came out with a gun, aimed at my mother and shot her at the back whilst looking the other way.”

Confirming the bloody incident, mother of the deceased, Maame Abena Donko, told DAILY GUIDE that Akwasi Tabi killed Yaa Baby because she had made up her mind to end the conjugal journey between them over allegations that the man had shirked his responsibilities as head of the family.

She narrated that her deceased daughter told her the man was not providing for her and the children, and that he had sold the only refrigerator that was being used to sell iced water for the up-keep of the home.

According to her, Yaa Baby would not budge in spite of several meetings held to trash out the misunderstanding between them, and therefore moved out of the man's house amidst threats of death and insults from Tabi.

“I was there this morning when one of my granddaughters ran to me, screaming that her father (Tabi) had shot my daughter and she was lying in a pool of blood. She died whilst being taken to the Bekwai Hospital,” Maame Donko stated in a sorrowful manner.

Vida Tabi also confirmed that her mother was living with her grandmother at a different house in the same community.

She said her parents had been fighting over money to keep up the home until her mother decided to end the marriage.

According to the primary five pupil, her father did not openly show any sign of frustration and resentment towards her mother; even though he had insisted that he would not allow Yaa Baby to walk out of the marriage.

Akwasi Tabi has since gone into hiding after the incident and is wanted by the police to face the consequences of his bloody action.