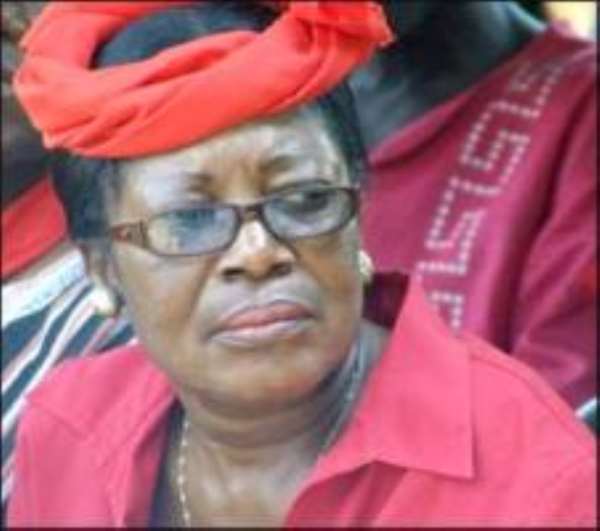 Modernghana.com news has learned that the latest construction is proposed to be a top of the range secondary school at Swedru! The hard-charging Benyiwa Doe made a name for herself on various radio networks when the NDC was in opposition as an avowed critic of the government of the New Patriotic Party over all manner of issues including alleged corruption and illegal acquisition of wealth by government officials.

Modernghana.com recently reported on a mansion she is putting up at East Legon.

A visit to the site at Swedru last week by Modernghana.com scout revealed that work was going on very briskly. In a conversation with Benyiwa Doe's neighbours, they disclosed that there was an old building on the site which belongs to the late father of Ama Benyiwaa Doe. According to the neighbours soon as Madam Benyiwa Doe was appointed as the Central Regional minister, she gave all the tenants a 21 day ultimatum to move from the house since she has plans to build on the land.

According to a 64 year old woman who was also a victim to the unlawful ejection by the government official they rented the house from Ama Benyiwaa Doe's uncle for a period of time but she used her ministerial powers to eject them from the house. She noted that they are struggling to get an alternate place to lay their heads.

Our Source again said that Ama Benyiwa Doe bought about seven policemen to effect the ejection. Another source said, the uncle of Ama Benyiwa Doe, Nana San, appealed to the Regional Minister to give the tenants some time so that they can put things together in order to move peacefully but this did not go down well with the Central Regional Minister who forcefully ejected these innocent tenants with the help of the policemen

The speed at which the Minister is working on the project is enough to make her neighbours suspect her source of income when ministers of the ruling government have not been paid their salaries to date.

In opposition, Madam Ama Benyiwa Doe was one of the loudest critics of alleged acquisition of wealth by the members of the erstwhile New Patriotic Party (NPP) government. She was to be heard on various radio stations lashing out on all manner of issues such as Hotel Kufuor and others. She also led a campaign to malign the NPP for allegedly dealing and profiting from drugs.

It was also alleged that Rebecca Sam who is the junior sister to the Central Regional Minister has been threatening the women in the area that their government is in power as a result no one can stop her sister from putting up a building, but inside sources hinted that Rebecca Sam pretended to be an NPP sympathizer in the constituency in the run-up to election 2008.

Meanwhile the angry tenants are demanding from Madam Ama Benyiwaa Doe the difference of their rent advance following their forceful ejection or they will advice themselves at the law courts.