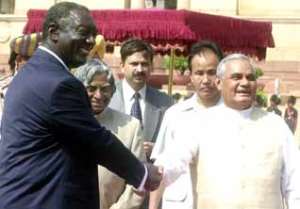 NEW DELHI, Aug 06: India has conveyed its serious concerns to Ghana over Pakistan-sponsored cross-border terrorism in Jammu and Kashmir as the two countries signed four agreements aimed at enhancing co-operation in diversified fields. New Delhi's perception on the current Indo-Pak situation and the “realities” in the region was reinforced during talks visiting Ghanian President John Agyekum Kufuor had with Prime Minister Atal Bihari Vajpayee and other leaders. The two sides signed in the presence of Kufuor and Vajpayee a Memorandum of Understanding on co-operation in information technology and services, a bilateral investment and promotion agreement, a protocol on having regular consultations between the two foreign ministries and an accord for cultural and scientific exchange programme. Ghana looks to India for assistance in developing agriculture, small-scale industries, and information technology as also medical drugs and equipment. Regional and international issues including the war against terrorism and the post September 11 situation figured during the parleys. Kufuor, who arrived here on a five-day state visit, had meetings with IT and Communications Minister Pramod Mahajan, Chemicals and Fertilisers Minister S S Dhindsa and the Minister of State for External Affairs Digvijay Singh. Later, he called on President A P J Abdul Kalam who hosted a banquet in his honour. The Ghanian President will leave for Agra on Tuesday after a meeting with Congress President Sonia Gandhi and will also visit Kolkata, Bangalore and Mumbai. PIC: Prime Minister AB Vajpayee shaking hand with Ghana President John Agyekum Kufuor while President Dr Kalam looks on.