Fatwa on Vande Mataram and Politics vs. Fatwas 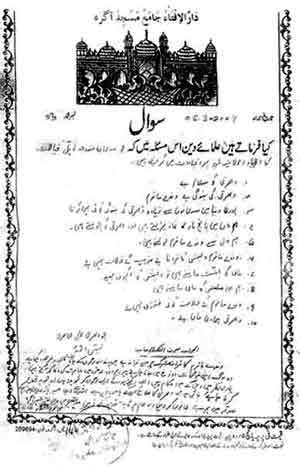 The 'veterans' of communal politics in India have once again got a golden opportunity for the time being. A few days back, the Jamiat Ulama-e-Hind adopted a resolution at its 30th general session in Deoband asking Indian Muslims not to recite 'Vande Mataram', an Indian national song. Upto what extent Indian Muslims will follow this resolution, this resolution applies on how many sects of Islam, Do Jamiat have the right to issue fatwas or other religious instructions for all the 73 sects of Muslims? Without giving a thought to all these important aspects, the staunch followers of communal politics- Rashtriya Swayamsevak Sangh (RSS), Bharatiya Janata Party and its sister organizations have already started giving extreme statements. An interesting thing vis-à-vis this controversial resolution is that the BJP is not criticising Jamiat Ulama-e-Hind much for the resolution, instead it is targeting the Congress for Mr. P. Chidambaram's participation in its general session. The BJP is trying to present the issue in such a way that this resolution has been passed by the Congress and not by the Jamiat.

Let us first know about the Fatwa. What is Fatwa? Who can issue it? And on whom these Fatwas are applied? First of all every sensible person should clear this misconception that the Muslims belong to a particular nation, community, religion or sect. like other religions of the world, there are many sections and classes in Islam. Traditionally, there are 73 different sects in Islam. Prominent among them are Deobandi, Wahaabi, Barelvi, Shiite, Ahmedi, Khojas, Boras, Qadiyani etc. Majority of Muslims of India belong to these sects. The clergy of different sects have different opinions and follow different conventions. Only a few conventions are common among them and that is- all the Muslims believe in one God. All the Muslims consider the Quran Sharif as their holy text and Prophet Mohammad as the messenger of God. So far as the Shiite's and Sunnis are concerned, though five times prayer (Namaaz) in a day is common in both the sects, but there is some difference in the ways of performing this ritual. Also, both communities have their separate interpretation of the holy Quran.

All these differences among Muslims have led to their different mosques. The Madrasas are also separate. Dargaahs (Mausoleums) are separate. Even the rites of birth, death, marriage rituals and even some of the festivals are different. Perhaps, non-Muslims are not so aware of these facts of the Muslims. That's why they start looking at the fatwas issued by the Jamiat , Darul-U-Loom or any other cleric, as for the entire Muslim community. Especially the organizations like the BJP and the RSS, as their 'political business' is entirely based on anti-Muslim rhetoric, they are always in search of such issues. Indeed, an authorized cleric of every sect of Islam has the right to issue fatwas for the people of that particular sect. the people or clergy of any other sect is not bound by the fatwa issued by the clergy of a particular sect. Therefore, this resolution of Jamiat should be considered as applying only on the Muslims related to the Jamiat-Ulama-e-Hind. Other Indian Muslims don't come under this resolution.

Now let us talk about Vande Mataram, fatwas and politics related to it. As mentioned above, despite the differences among them, all the Muslims of the world have no dispute regarding one God, the holy Quran and the prophet. And the teachings of the same Quran and prophet tell us that patriotism is an important character of Islam. These teachings direct the Muslims to be loyal to their countries. Any practicing Muslim, either belonging to any sect, can't doubt his patriotism just because of a 'fatwa'. But unfortunately, the people interested in politics of communal polarization, start talking about sending all the Muslims to Pakistan or call them separatists just on the basis of these irrational fatwas.

The translation of 'Bharat Mata' into 'Maadar-e-hind' was not done by any person belonging to the BJP or the Sangh; instead it was by a great Muslim poet. 'Heaven in the lap of mother' is also an Islamic concept. Therefore to respect one's own nation is within the periphery of Islam. The people, who doubt the patriotism of the Muslims, are concentrating more on their politics of communal polarization. These people should think whether the singing of a national song would influence anybody's patriotism or their attempts to sponsor carnages like Gujarat riots would put a question mark on their own patriotism.

On the other side, the organizations issuing controversial fatwas should also try to come out of the well. These fatwa 'specialist' organizations should also analyse the utility and validity of their outdated fatwas. Since many years, the clerics of Jamiat and Deo Band are issuing fatwas against terrorism. Certainly these are a welcome step and convey a positive message too. But it is equally true that in spite of these fatwas, the incidents of terrorism and killings of innocent people have increased in the recent past. So, the decision to sing Vande Mataram or not, should be left on the Muslim guardians. If a child, with his own will, starts his study after the schools traditional prayer, hymn or song of the school, it should be seen as an example of 'Unity in Diversity' and not in the light of prejudice and orthodoxy.