Children on sale in Accra? 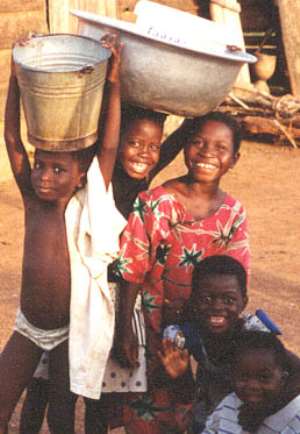 Investigations into child slavery and trafficking have revealed that children are sold, some as low as ¢50,000 at some markets in Accra. Miss Stella Ofori, a Labour Officer at the Child Labour Unit of the Ministry of Employment and Manpower Development, who disclosed this in Kumasi on Thursday, named the markets as Maamobi, Nima, Agbogbloshie and Makola but said the children are sold to buyers only known to the sellers. She was delivering a paper on: "The Child Labour Situation In Ghana" at a day's seminar organised by the International Programme on the Elimination of Child Labour (IPEC) of the International Labour Organisation (ILO), in collaboration with the Kumasi Metropolitan Assembly (KMA). It was organised for assembly members, government officials, the media, chiefs and opinion leaders in the metropolis to sensitise them on the vicious circle of child labour, illiteracy and poverty. Miss Ofori said children were trafficked to Togo, Benin, Nigeria and Gabon, adding that child trafficking was a complete chain involving those who recruit the children, those who transport them, the receivers or distributors and the employers. She said there were over 800,000 children in Ghana involved in hazardous labour and that there was evidence to show that the menace was on the increase. Giving statistics to show the extent of child labour, she said out of the 210,800 economically active children aged between four and 14 years, 186,300 were in child labour and 111,300 were in hazardous jobs, while out of the 140,900 of the economically active aged between 15 and 17 years, 59,200 were in child labour while 59,200 were engaged in hazardous work. Mrs Sylvia Hinson-Ekong, ILO/IPEC Programme Manager, said the ILO has been trying to fight child labour since its inception with the adoption of Convention Number One on minimum age in industry during ILO's first international conference in 1919. She said with the adoption of Convention Number 182 at the ILO Conference in June 1999, in Geneva, a new direction and focus have been given to the IPEC programme. Mrs Hinson-Ekong said Convention 182 re-directs attention to the eradication of the worst forms of child labour, adding that it was the most ratified convention in the world. She said, however, that if the worse forms of child labour were to be eliminated in the country, then district assemblies, area and town councils, unit committees, opinion leaders, chiefs and the people should play key roles because the children belong to individuals and the countries. In a welcoming address read on behalf of Mr Maxwell Kofi Jumah, the Kumasi Metropolitan Chief Executive, he said that the character of every nation was judged by the way it treated its children. He said child labour was a barrier to socio-economic development and must, therefore, be given all the attention it deserved. Mr Jumah said that was why the KMA did not condone child labour and exploitation and has joined hands with organisations, including non-governmental organisations to eliminate this canker by taking the children off the streets of Kumasi to be sent back to their parents or to school.