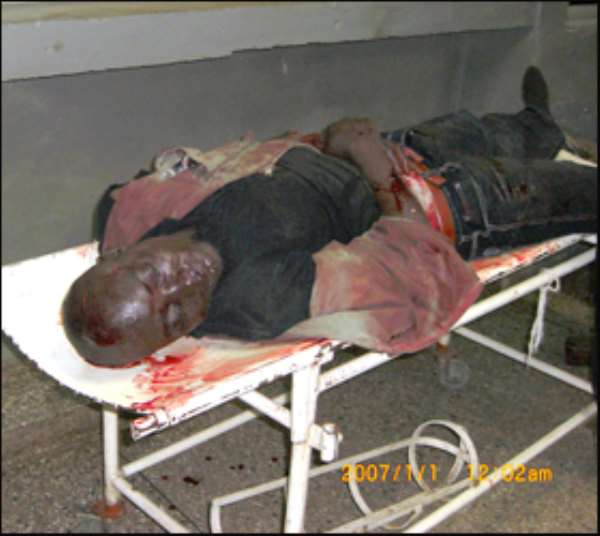 Police sources have confirmed that the death toll in last Tuesday's “Taliban” strike at the Agbogbloshie Market, otherwise called Konkonba Market, has risen to four, following the death of two of the seriously injured persons at the Police Hospital.

The dead have been identified as Suale, Yakubu aka JY, who hailed from Tolon near Tamale, a certain Sulemana from Yendi and Alhassan Fuseni aka Gbirin, who is 42 and a father of two.

However, the Police have denied accusations of slow response leveled against them by factions in the Agbogbloshie clashes in which the four young men were butchered to death in broad daylight, in the presence of witnesses. Several others are receiving treatment with varying degrees of injury at the Police Hospital.

According to Superintendent Oklu Gyamrah at the James Town Police Station, his outfit acted swiftly when news about the violence trickled into the station.

Earlier reports of political undertones fueling the clashes was confirmed after area leaders of the two political parties, the New Patriotic Party (NPP) and the National Democratic Congress (NDC), in separate interviews claimed to have notified the police of the simmering tensions in the area hours before the violence.

Two of the deceased, Alhassan Huseini, and Suali, were butchered to death by a mob of about 20 men close to the police station with blood splattering all over the place but police personnel on duty could not act, ostensibly because they were outnumbered. No one has since been arrested while the Police indicate they are investigating the mayhem.

Mohammed Salifu Issah, a community leader for the NDC, claimed that he lodged a complaint with the James Town police immediately after they had information that supporters of the NPP had returned from Bawku to take over a land at Agbogbloshie which hitherto belonged to them.

The NPP's Cornelius Dettoh also claimed to have notified the police of a possible violence, after he learnt that some people in the area were trying to resist the return of his colleagues, whom he claimed had come to engage in their vocation.

Although no skirmishes were recorded yesterday following the carnage of the previous day, DAILY GUIDE can report that many of the New Patriotic Party (NPP) supporters, especially the known ones, have fled the location, fearing that they could follow the path of those who were butchered earlier.

Many of the weapons such as knives, axes, and cutlasses used in the attack were manufactured by the local blacksmiths in the area, sources have hinted DAILY GUIDE.

Some of those who fled the place confided in DAILY GUIDE that since no suspects are usually arrested when such mayhems unfold at the Konkonba Market “the best thing for us to do is leave the place for the Talibans to do as they please.”

According to the Police Public Relations Director, DSP Kwesi Ofori, they are checking other medical facilities to find out whether there are other injured persons there.

He disclosed also that but for the timely intervention of the Police, the situation would have been worse than witnessed.

The security at the place, he added, has been beefed up with the location of an armoured car and some armed policemen.

However, the claim that the attack was precipitated by the quest for turf at the market has been disputed by one of the fleeing men.

No one was imported from the North, he said, explaining that “these people were residing at the place before the last elections but fled following the incessant attacks by the 'Talibans'.

After staying in the North for sometime, they returned to Accra and decided to return to base. That was all that happened. This idea that some persons had imported people to come and fight for them is totally out of place.”

A police source has explained the number of those involved in the clash overwhelmed the police at the Agbogbloshie Police Station.

Some hours after they were killed, the corpses of the victims were strewn across the area, especially close to the Police Station in the location.

Although the market is the main yam market where traders of the produce from the North sell, it also serves as the centre for the scrap metal business.

Most blacksmiths from the Dagomba ethnic grouping live here and do brisk business. The chieftaincy divide in Dagbon is deeply reflected there.

The political season aggravated the situation with a number of skirmishes recorded even before last Tuesday's carnage.

Unfortunately, no arrests have been made even after one person lost his life in the February clash.